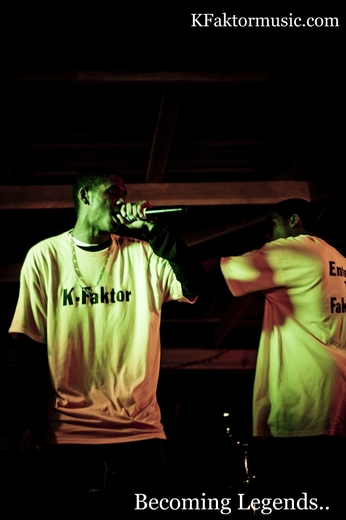 K-Faktor is a Hip-Hop/R&B duo based in the US Virgin Islands. The group consists of twins, Kevin and Kai Moolenaar who write and record their own music. They are currently working on their first mixtape EP Factorize which features 4 songs and 2 bonus tracks. K-Faktor plans to promote their mixtape via facebook and at live shows throughout St.Croix, US Virgin Islands.

Born and raised in the US Virgin Islands, Kevin and Kai began to gravitate toward music in junior high. They participated in various school talent shows, which eventually led them to open for the Cheetah Girls in 2006. Motivated by that performance, they decided to pursue a professional career in music. Over the next 3 years, they developed their stage presence and songwriting skills. In 2009, the talented twins entered the 2nd Annual St. Croix Idol Competition. Singing a capella, they overcame technical difficulties, earned the highest audition score, and finished in third place. After taking home the trophy, they built their online fanbase by uploading songs on Facebook, Reverbnation, and Ourstage. Late 2010, they aligned themselves with brand management firm Artkast, expanding their image and creative vision.

Although they look similar, their personalities are far from identical. Kevin, the lead singer, is harmonious and laid back. Kai is the lyricist and ultimate hype man, creating a musical balance between the two. The brothers describe their music as introspective hip hop with a melodic twist. Their topics range from love and life, to hopes and dreams. Factorize will fullfill K-Faktor's promise of originality and an energetic fusion of Hip-Hop and R&B. The Factorize EP is scheduled for release on CD and MP3 format late 2011.