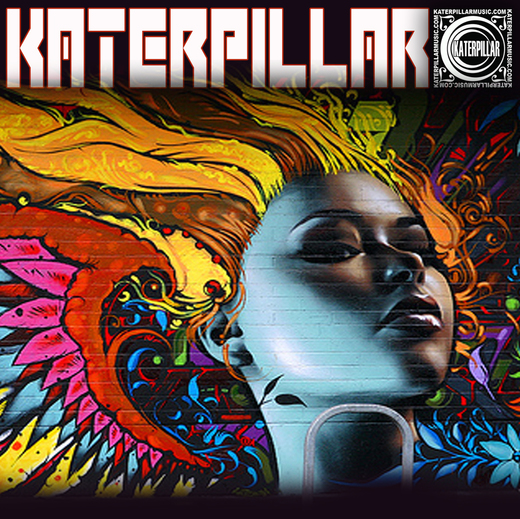 Meet Katerpillar, the sound of groove-rock /funk-break music. Their jams fuse rock, Latin percussion, hip-hop and funk. Established in 2003, Katerpillar boasts a host of radio-ready tracks compiled from their debut album, “Metamorphosis,” and E.P.s “Katerpillar,” and “From the B-Boy Vault.” Singer-songwriter Rod Soriano’s uniquely edgy melodies and lyrics have attracted a family of musicians that make up Katerpillar’s groove rock style. Bassist Tasnu Tumer piques listeners’ interest with her driving bass grooves. Tansu brings heart and soul to Katerpillar’s musical foundation, giving bass enthusiasts a sound to salivate for. Percussionist Jay Pacheco is an expert at his craft, showing his skills with an array of percussive instruments from bongos and congas to timbales and chimes.  Jay brings a spicy Latin complexity to the music. Drummer Paul Cassarino (aka Caz) met up with the band early June 2011 who was introduced and recommended by Danny Kay (trumpets). Paul displays a musical sensitivity tantamount to Katerpillar’s unforgettable sound. World famous DJ Hazze collaborates with Katerpillar on their e.p. “From The B-boy Vault,” adding his signature scratch tracks and raps to Katerpillar’s eclectic sound. Trumpeter Danny Kay has been playing since the age of twelve, studying under greats such as Dennis Farias, Jeff Kaye and Rich Hoffman. Danny of (Dirty Rotten Horns) brings to the band a freestyle feel with a dirty funk tone. Featuring singer Lindsay Cole who accents the music with lilting harmonies and brings a new energy and attitude to Katerpillar’s set. Now a fully cohesive band with an unmistakable and eclectic sound, Katerpillar is going stronger than ever. The rest is musical history in the making.