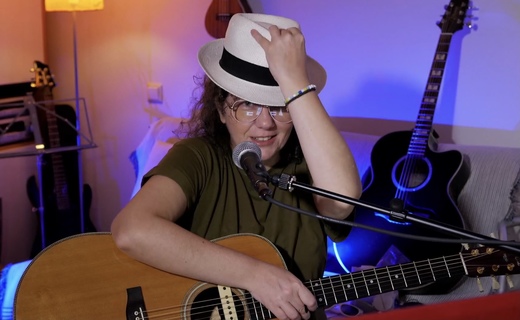 Kalliopi is a pop-rock singer/songwriter from Greece. She went to London a few years ago to take her music further, where she completed a single called Around the World, which included the song Summer is Over, originally performed by Dusty Springfield.
At the moment she is between London and Athens working on her new album, which will have 11 original songs. Kalliopi has performed in various venues in London, like Betsew Trotwood, Rock Garden, Infinity Club, George and Dragon and the Hope & Anchor. She has been writing songs and melodies you can carry with you. “You may not have heard of her yet, but with a multi-talented, multi-lingual repertoire, chances are she will burst on to the world stage soon" European Weekly.
Kalliopi graduated from the German School of Athens and went on to the Arts Theatre of Karolos Koun to become an actress. She has played many lead parts in the theatre, mostly at the Arts Theatre of Karolos Koun.
As a singer, she also collaborated with well-known producer Coti K. in a remake of some of Lena Platonos songs that was released by FM Records, with Michalis Delta, Apontes, H3.
Later she became the singer and co-writer of the band MINIMA who released an album at Lyra/MBI Records and joined pop-rock artist Christos Dantis as a supporting act in his concerts at festivals, small venues and clubs all around Greece, in Cyprus and Germany.
Her influences range from Madonna, U2, Blondie, Joan Jett, Garbage, David Bowie, Sting, The Rolling Stones to The B-52's, Alanis Morissette, Led Zeppelin and The White Stripes.