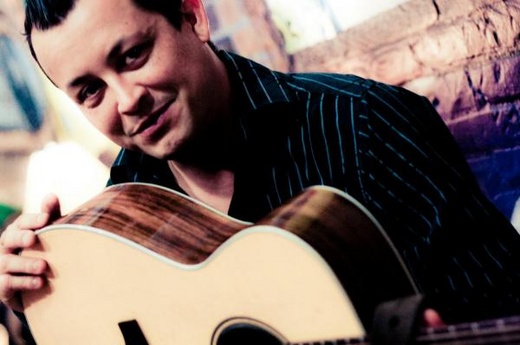 Kade Puckett specializes in finger-style incorporating as many genres of music he can into it. He began playing guitar at the age 13— after being influenced by his grandfather who introduced him to the music of Chet Atkins. But, after watching Eddie Van Halen play "Eruption" he was mesmerized and has since continued his journey in the world of music. Puckett has also played in many different bands during his career which include country, rock, jazz, gospel and several others. In 1991, while in high school he helped design, build and play the World's Largest Guitar-- which was later purchased by Dick Clark. He also played this giant guitar for Dick Clark. Through the years, Puckett's musical endeavors have developed into a solo act that can be seen at various musical venues. As a guitarist, his musical mastery and ability to communicate emotion through sound set him apart from the rest. Puckett's live performance literally sways the crowd with hypnotizing sound. Music is the language he knows best and few can express such heartfelt emotion through sound. His sound has been heavily influenced by Chet Atkins, Tommy Emmanuel, Jerry Reed, Eddie Van Halen, Pat Matheny, Steve Vai,and many many others.