Hey guys it’s Melissa. It’s late at night and I’ve decided to do something a little unorthodox with our bio here. I’m writing it, personally, just for you.

Since I’m writing this story, I could really tell you anything I wanted about June Divided. I could tell you that we’re a rock band from Philadelphia. And that we dig bands like Jimmy Eat World and Thrice. And that we started in late 2010. But this is boring me already so let’s do something fun... like, 2 Truths and A Lie- I like that game. Guess which sentence is a lie about our band. Ok ready here we go

a.) Chris’ distant relative is Chuck Norris
b.) We found our drummer on Craigslist
c.) Keith put a live frog in his mouth

If you think that A is a lie, you win! (Which means B and C are true stories- think about that for a second….

Unfortunately, Chris is in no way related to Chuck Norris. But I will tell you something (slightly less exciting), but true about Chris: I met him in college, and we wrote music together. We never had the “rock band dream”- in fact, we were nerdy music tech kids. After graduation we kept writing to stay happy and sane during the post-college job hunt. At some point a friend joked that we should try to find a drummer on

Craigslist. Yes, like I said, we found Keith on Craigslist. On a whim, we put an ad out. And like a stray puppy or something, there he was. Needless to say, we all clicked. (Honestly, who wouldn’t make friends with the guy putting frogs in his mouth?) And the great thing about Keith was that he wasn’t dying to be a rock star either. He was looking to make music, just like us

So we did. And our first EP, The Other Side of You, is what we came up with. Lucky for us, our pal Alec Henninger, (Soundmine Studios), produced and recorded it, and so by the beginning of 2011 we released it. Just like that

To our surprise, people listened (thank you!!). Then, Lenny Sasso stepped in. He was the manager and friend we didn’t know we needed. So we started playing everywhere and called in our college friend, Rich. He was the man with the plan and the bass. So we got a move on- we played SXSW, Warped Tour, NBC, mtvU… now we just can’t stop

So here we are. This music has become our career, and it’s amazing that something so small could grow so fast. The “rock band dream” was never really our thing until we realized how much love and support we have from our fans, friends, and family. Now it’s a reality, and we wouldn’t change it for the world. So thank you for being here, and thank you for listening.

Let’s play 2 Truths and A Lie again. Guess which 2 sentences are TRUE
a.) Chris’ distant relative is John Travolta.
b.) We love you
c.) WE’RE MAKING OUR FIRST FULL-LENGTH ALBUM- NOW!!!! 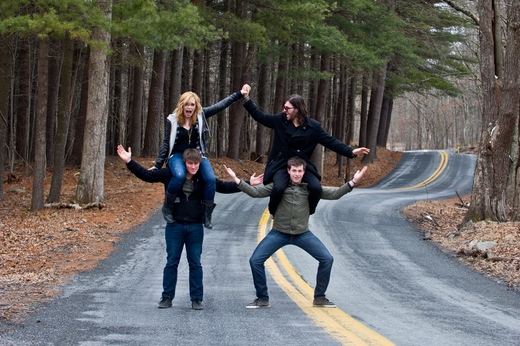