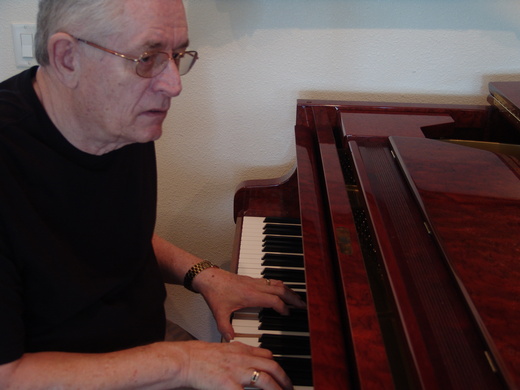 Having been born in San Bernardino, CA in 1940 and coming to Glendale, a suburb of LA at the age of 1 we might consider John a native. He started piano and drawing simultaneously at the age of 5 has been doing both ever since. At the age of 12 he tried Cello for a while but quickly tired of carrying it around. Classically trained for a couple of years he found that he could hear a song and play it and since this was a lot more fun, went in this direction. He got turned on to jazz at a his first concert hearing Cal Tjader, Bud Shank and a terrific sax player that was either Stan Getz or Gerry Mulligan.

Later on his mother turned him on to an album by Errol Garner called "Concert by the Sea", recorded at Carmel, CA and he listened and leaned all of the arrangements by ear. His musical tastes were later affected by the likes of Pete Jolly, Bill Evans, and later by Kieth Jarrett. John wrote his first composition at the age of 14. It started out like a Bach fugue and turned into a full swinging tune. It had no title but was the beginning of hundreds to come. At the same time he was taking the "Famous Artists Course" from Westport, Connecticut, (You know-"Draw Me" and win an art scholar-ship- kind of thing). He used to have friends over and they would make recordings while beating on any nearby objects that might sound interesting.

At 18, he won a 1/2 tuition scholarship to Chouinard Art Institute and at 20 he began to play in clubs around town. He got his first music job by going through the local Glendale yellow pages and calling about 35 clubs. He got three auditions and landed one job at a place called the Zebra Club for $15.00 a night. Over the next few years he worked at art during the day and played different clubs at night, sometimes as far away as Newport Beach. He had a duo for a while, a trio but mostly played solo, doing as much jazz as possible. Highlights included playing with the Elliot Bros., having Gene Kruppa sit in for a set , and being asked to join a big band .

From jazz improvisation to a more classical type of improvisation was an area that intrigued him very much and in 1961 John found a 9 foot Steinway grand in an empty room and began to try some new things. He was overheard by someone and invited to play at the Brand Art Library, but was too shy to perform or perhaps this genre of music was too new to him. There was a correlation between what was happening in this music and his studies in abstract painting with Robert Irwin at Chouinard that made it very exciting. This excitement has intensified and 32 years later this still interests him. In his debut tape "Peruvian Suite" all of the music is improvised on the first stage. Each subsequent track or instrumental layer is improvised until that song is finished. This helps to keep a freshness that rivals live performance.