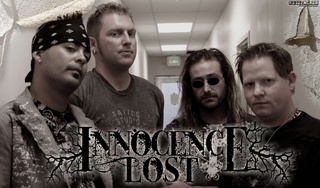 Ask anyone between Salt Lake City,UT and Denver,CO who is the best unknown rock band around and you are most likely to hear the name Innocence Lost. Born of small town trappings and raised under a blanket of religious and social judgements, they were the ones deemed unsalvageable, unsavable...lost. In the silence of isolation, from under a shared love of music they picked up instruments and gave birth to an entity that would outshadow us all. Now, whispered about like the many legends and stories of the Rockies, they come down from the mountain like an avalanche covering the audience with a layer of blues tinged, power groove metal. Songs that conjure the wilds, incite explosive rebellion, and rain thunderous melody. For over a decade the odyssey that is Innocence Lost has continued to grow. Where other bands strive to "make it," Innocence Lost remains a beacon of selfless aggression, friends making great music for the sake of making great music, forever challenging each other to grow. The objective has been and always shall be to get the music to as many ears as possible. By Innocence Lost standards, success is measured in pumping fists, shouts of approval, and the unity envoked by the music that binds the