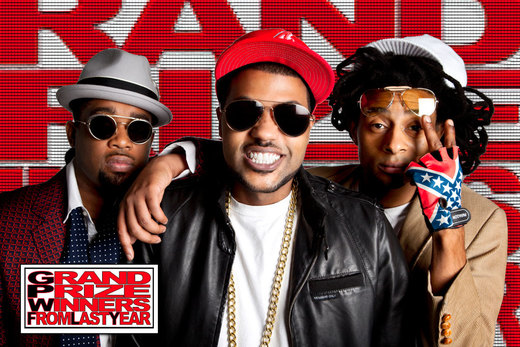 Grand Prize Winners From Last Year (GPWFLY), are an Atlanta based band that began their career opening for acts such as Cee-Lo Green, Triple SIx Mafia, and Janelle Monae. The band consists of a drum machinist, guitarist, keyboardist, bass player, and a horn section. They refer to their music as genre-less but have drawn comparisons to NERD, TV On The Radio, and most notably Outkast. Since their beginning in 2007 GPWFLY has been featured in major publications such as Rolling Stone Magazine and The Fader and have performed at the A3C Festival in ATL (Largest hip Hop Festival in the southeastern US), SWSX 2011 where they opened for Killer Mike & Young Dro, the 2012 CMJ Festival in New York (Headliners), and most recently were invited to the 2012 Roots Picnic (50,000+ in attendance) where they performed with such acts as The Roots, Wale, De La Soul, Kid Cudi, Mos Def, Diplo, and Rakim. The video for their single "Electric Blue" was featured at the 2012 Atlanta Film Festival (20,000+ in attendance) and they were asked to perform as part of the festival entertainment. Their live show is regarded in the U.S. to be one of the best you can see and GPWFLY has also licensed their music for use on TV in such shows as The Food Networks "Diners, Drive-ins and Dives", Current TV's "The Young Turks with Cenk Uygur" and at the Council of Fashion Designers of America Awards (Fashion Oscars).