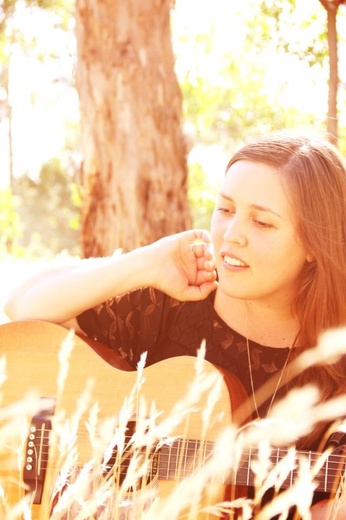 “Beautiful.”Clare Bowditch
“An expressive voice that engages you instantly.” Gotye

If there is one enduring tradition in Australian music, it’s that of the songwriter. Our country’s musical heritage is littered with artists who run their eye over the stuff of everyday life, committing it to music and forging a unique connection with listeners in the process.

And it is a down-to-earth, no fuss tradition at the heart of Melbourne artist Hannah Acfield and her music. Listen to her new EP Where You Once Lay and it’s not just her stunning and remarkably flexible voice that grabs you, but the honesty and simplicity of her music. It feels like writing and performing is just second nature to her.

But then it was unlikely Hannah would follow any other path – it’s in her blood. Growing up in a family full of musicians, making music just seemed like the most natural thing for her to do.

“We had a musical instrument bowl on the table instead of a fruit bowl which was full of maracas, harmonicas, tin whistles, clap sticks,” Hannah explains. “Kids in the neighbourhood who would drop in thought we were weird… but for us it was completely normal.”

Since then she has seen music take her from her hometown Rockhampton to Brisbane and, more recently, her new base in Melbourne. It’s a journey that has seen her grow immeasurably as an artist, now making good on the promise shown on her 2007 debut offering My Tomorrow. That release that saw her gain support at community radio, make the finals in a slew of MusicOz categories, and play venues up and down the east coast – she was even invited to perform at the 2009 Perthshire Amber Festival in Scotland.

While Hannah was anxious to release a new record as soon as possible, she didn’t rush the process. Taking her time to hone her songwriting and fine tune her emotive delivery. When it came time to make the new EP her goal was simply to move in a new creative direction, ensuring the focus be squarely on the songs and her striking voice. Growing as an artist, she new exactly the kind of record she wanted to make – perhaps for the first time.

The result is Where You Once Lay – an EP brimming with newfound confidence and style. While Hannah describes her music as contemporary folk, there’s much more going on here. With a dash of pop, the tracks even touch on the warmth and directness of country music…without the clichés. If you picture respected local acts like The Waifs, Missy Higgins and Women in Docs you can see the tradition Hannah is tapping into.

And while her songs touch on things that bruise – the collapse of a long-term relationship, the aftermath of Victoria’s bushfires – you can’t help but feel the sense of optimism in this batch of songs.

With her strongest work to date now on record, Hannah plans on spending the next year or so taking her music on the road. The album launch tour to Brisbane, Melbourne and Sydney will be the first wave in a growing run of dates. Sometimes backed by her band, sometimes in intimate solo mode – Hannah’s show is as compelling as her songs.

Make no mistake – this is one artist here for the long haul.