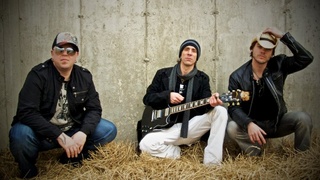 HAARD Bio
HAARD‟s 2010 release of Savour the Flavour is a fusion of power house riffs and whimsical tongue and cheek lyrics, echoing a time when music was pure and straight from the
heart. The album is not influenced by specific bands so much as eras that resonate feelings of hope and renewal. Without a doubt there‟s an uncontainable spirit within the song composition.
The band consists of Patrick Benti on lead vocals/guitar, Ed Mortenson on the drums and Jeff Eager on bass. HAARD is the band that will distinguish an era marked in 2010. This album
contains serious contributions from some of the industry‟s best including Ian Thornley‟s vocals on „Moody‟ and Mike Mangini (Steve Vai, Extreme) playing on the song „Harvard
Yard.‟ “He‟s not human,” says Benti. The album was produced and mixed by John Whynot (Big
Wreck, Dave Matthews, Blue Rodeo) and recorded in various studios in Toronto, Boston and LA. Savour feature track and rock radio hit-in-waiting „Confidential‟ showcases the relentless
positive vibe found in many HAARD songs. Its soaring guitar line and tough-it-out message is
bound to inspire. “I‟m a big fan of positive energy. I just want to be excited,” says Benti with his
unmistakable Boston accent. “I know what's going to make me bored or turn me off, so I want to
create what‟s going to make me feel that excited while playing it,” and „Savour the Flavour‟
is definitely that. The hippy hippy shake of the 50‟s, A hard day‟s night of the 60‟s, the
razzmatazz of the 70‟s, and the looks that kill of the 80‟s all fuse to create something both
contemporary and timeless. “There‟s too much negative energy out there,” says Benti. “I just
want people to pull away good vibes from all of this.”