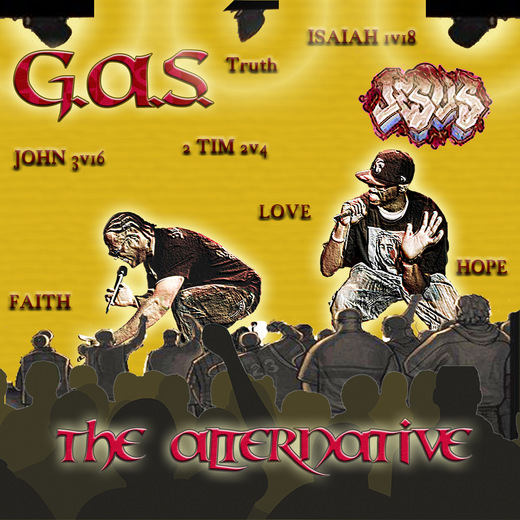 G.A.S. upcoming project "WAR(Enemy vs Inner Me)", due to be released Late Summer 2012.
This project will feature songs like the first single "Good Enough" which made it to #1 in Urban/Gospel on Soundclick.com and available on iTunes,"It's War", "We Grind", "Brag On Em" and many more, up to 18 banging tracks!!!
You can check out Video for title song at: http://youtu.be/4VfLlw90jWk

The release of God's Anointed Soldiers new album "The Alternative" is here. Featured on this project is smash hit "Saints go hard" along with "Walls of Jericho,"The Witnesses", and many more.
iaeMagazine.com review by Leslie White for "The Alternative" 3.5 out of 4 stars, "Banging Hip-Hop joints definately gets your attention.
Nice flow and great lyrics. Finally! A Holy Hip-Hop group that really brings it! A lot of artist(who aren't that good to begin with)try Christian music and think it's okay to be lackadaisical, thinking people will still listen to it just because it's Christian music. God's Anointed Soldiers are one of the best at it. Certainly recommend!"
The group consists of "King Dave" , "Uptown" and will feature New artist like "21 The King", "Awest", "KING KONG", and others. The music delivered would be described as positive, uplifting lyrics that promote solid biblical teaching with a "Mid-dirty style" and sound, backed by banging beats. Performances have been labeled powerful, energetic and moving.
G.A.S has had the priviledge of opening up for several national acts such as Building 429, Mercy Me, Jeremy Camp, Skillet, Thisl, A Road Less Traveled, Kirk Franklin, Third Day, Seventh Day Slumber, The Museum and others.