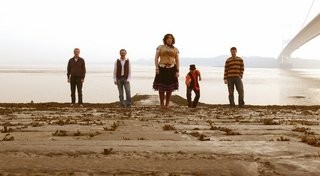 Ghost of a Dog

About Ghost of a Dog

Ghost of a Dog hail from Monmouthshire, and the west of England, the five piece band have quickly established themselves as being at the forefront of the Americana/Folk/Alt-country/Roots movement in South Wales & the West, hot on the heels of other contemporary Roots bands in the area and across the country. They have “charismatic” front woman Tamzin Powell, who creates a powerful yet controlled sound, variously described as everything from “...a female Ryan Adams” to “...a country Kate Bush”
In the Bristol Evening Post, Keith Clark said:
“Reviewing bands that place themselves under the Alternative Country umbrella you get used to describing singers as having voices that are fragile, vulnerable or exposed.
So it makes a real change to be able to write about an alt. country outfit that has a singer with a rich and very powerful voice.
For Tamzin Powell, who fronts Ghost Of A Dog, certainly knows how to belt out a song.
Ghost of a Dog’s debut album, which is due out on 14th March, mostly co-written by Matt and Tamzin Powell, will air NEW tracks such as ‘Colour me Blue’, about the pain of love for a female artist, ‘The Russians are Coming’, a take on ‘The Butterfly Effect’ and time travel, ‘Ball & chain’, written by slide roots Bristol man, Chris Reese, which explores the pain of just giving into life, ‘Ghost Detainee’, a look back at a Woody Guthrie song, but updated to the current climate, and many more modern tales.
Other band members are bass player Jonathan Attree; singer-songwriter/acoustic guitarist Matt Powell, lead guitar, banjo/ singer-songwriter Tracy Neil Ellis-Brooks, and Marc Aird on drums & percussion.
Tracey Neil, on lead guitar & banjo has a quality to his playing that is reminiscent of ‘Buffalo Springfield’. Rhythm guitar man Matt is the ‘glue’ of the entire band, whilst Jon and Marc provide a solid rhythm section, resulting in an edgy, alt-country rocking roots feel. Influences are vast and varied, from The Byrds, Neil Young, Whiskytown, Cowboy Junkies, Joni Mitchell, Emmylou, Lone Justice, to the Mc Garrigle’s, Kate Bush, and Calexico to name a few, traces of which can be detected in their songs which are not like anything you would have heard lately. Their sound is underpinned by their collective love of American based acoustic music & ‘70’s songwriters, with a liberal helping of rocking balls.
Any press please contact us below for review copies:
For further information contact us on 01600-772776 or email info@ghostofadog.co.uk

Ghost of a Dog