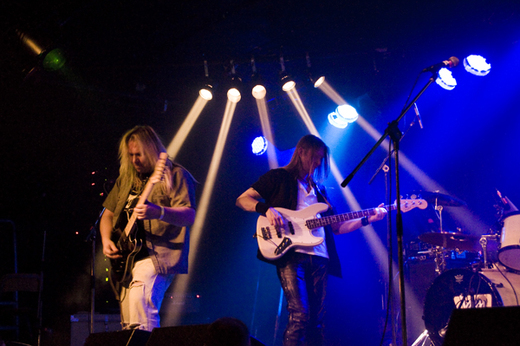 Fretless as a band started in autumn 2009 in Gothenburg, Sweden. From the start is has been great response when the guys are playing live. 2010 Fretless started the recording of their album "Local Heroes". They Mastered the album at the well known studio near Gothenburg, Bohus Sound. They talked to many different labels that showed interest for their release. They decided to work together with E.L.T Records in Birmingham (UK). In december 2010 the album were released digitally and can be found on all major download sites. In january 2011 the "real thing" were released. After the releaseparty at Valand in Gothenburg january 28:th radiostations worldwide have played Fretless album. Live interviews and main act on many shows has been done. In May 2011 they become "The Band Of The Month" on the Australian site Rapidbeat Promotion and News. Fretless has also been "The Band Of The Week" on a major rock site in Sweden "Rocksverige.se" The members of Fretless are not new in the business. They all got over 25 years per person as hard working musicians. They are working real hard both on stage and with everything that has to be done in a band. People think that they sound like... Accept, Running Wild, Thunder, Pretty Maids, Edguy, Saxon, Iron Maiden and many more. How is this possible you might ask your self. They all got different sounds and so on. We belive that these 3 guys have found their own sound, of course with influences from the 80:s Old School hardrock. We can call it the Fretless sound! ;) These guys are ready to Rock! Are you ready for them? Of course you are! Lets Roll! ;)