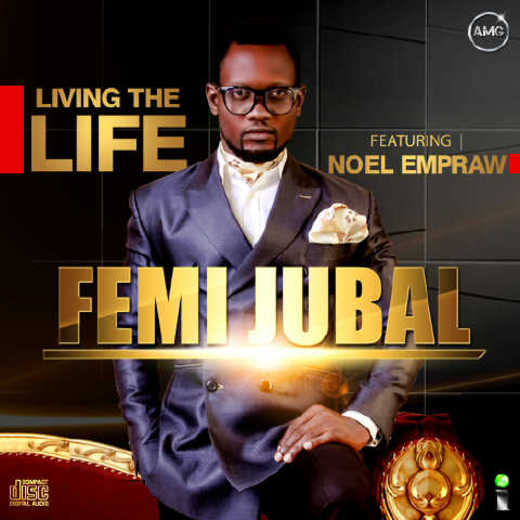 Femi Jubal is back!

Do I see lovers of good music smiling already and getting ready to put on their dancing shoes?

After serenading the world with quality Afro music and going on a self-imposed music exile, he returns with another bang.

No doubt he is one of the most versatile Afro Hip Hop Artiste whose eclectic sounds are fusions of African beats, pop music, traditional folklore, African jazz and Gospel.

After a short break from the mainstream, Femi Jubal returns due to his undying passion, and love for his fans, to redefine music and use it as an instrument of change, peace, hope, justice, love and unity in Africa and beyond.

He has received international recognition for his sound and style.

In 2005, his single CRY OF AFRICA (reflecting the pain of the people of Africa) topped the charts on major US radio airwaves and was featured on OURSTAGE's monthly entertainment magazine, getting accolades in Europe, Africa, America and Australia, winning awards and recognition for supporting the fight against genocide in Darfur.

After releasing a second album in 2011, working with dynamic producers and vocalists like Cobhams, Kraftmatiks, Ekelly, Dmm, Faze, Aramide, Chuddy k, Maytronomy, Modenine and others, Femi Jubal made it to the global music market and enjoyed quality airplay on international airwaves and special review from two of the UK most respected music heads.

"A resounding thumbs up for Femi Jubal... I can hear good sounds which means good music and this is why it's on the playlist." - Gary Cowly on the BBC show London.

His song "Ere (Drum major)" produced by Cobhams debuting on major UK internet radio stations including BBC 1XTRA play list as a second Nigerian artiste to feature on the play list after Dbanj.

Femi Jubal has gotten lots of accolades locally and internationally working with the international record label MOIKO INTERNATIONAL based in Denver, Colorado and featuring on major compilation albums with other international artistes from different parts of the world.

Also, he is an entrepreneur and social crusader, and has made, locally, commendable impact and relevance in the Music industry, business world, youth, social and governmental affairs to name a few.

Femi Jubal's comeback is with a new version of the song that took over the local and international airwaves in 2011 "LIVING THE LIFE featuring Modenine" who broke his law by going commercial, co-written and produced by Kraftmatiks.

Living the life speaks of the higher life which is God's mandate and purpose for man. The message it advocates is that we all - no matter our condition - have the choice to either take a shot at greatness and be happy or fold our arms and be negative.

The song contains a re-sampling of Fela's "Kere keke ji keke" with an excellent rap by Noel Empraw and great production by Magik Adams.

Femi is proving once again that he is a force that can't be ignored.

Living The Life ft Noel Empraw, produced by Magik Adams premieres in Nigeria, the US and the UK in October.