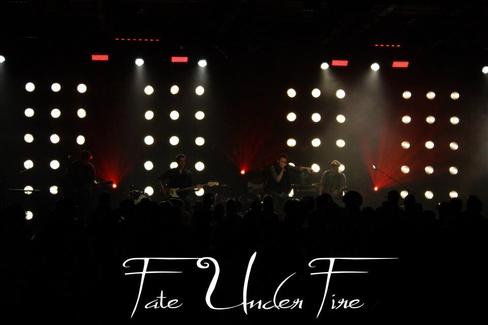 About Fate Under Fire

What if you were told that tomorrow the fate of your life would be in someone else's hands? How would you react? We in Fate Under Fire believe is taking control of your life, and living it to the fullest extent. We are about putting on amazing shows, (with our custom, 45 piece light, laser, and video show, syncapated with our music) writing amazing music, and, most importantly, about helping others. We in FUF partner with non-profits that support a wide array of causes. Namely, alternative methods to fighting sickness, especially cancer. We want to use our SoapBox to help people take control of their lives in many way, but ofcourse to help their body begging for a change. We believe we can save lives through our music. We also support clean water, and anti sex trafficking orginizations. Our shows help us help people. Putting on a new kind of show people haven't seen yet, is just another way for us to entertain, and spread a desperately important message. Your fate is in your own hands.

(read below for our past, and bio)

Fate Under Fire is an alternative rock band that formed in the summer of 2008 by singer/songwriter David James. Music had always been a huge part of David's life, but after a significant loss, he turned to music as a release and began to pursue his life long dream.

Fate Under Fire had spent the first few months writing new material and playing shows around their home town of Sacramento. They released their first 4 song EP 'The Simple Things' in the spring of 2009, which they self produced and recorded at James' home studio. They signed with Right Brain Management just prior to the release of their CD and with the help of Right Brain, they embarked on their first west coast tour.

Upon returning home, they were offered a spot to compete in the Sacramento State Battle of the Bands. One requirement was to play at least one cover song. Being fans of hip-hop and dance music in general, the guys decided to cover a song by Soulja Boy Tell Em called 'Kiss Me Thru the Phone". The song has been pretty popular and has started a buzz around Fate Under Fire.

During this time James met fellow musician, John Gillis. James and Gillis instantly clicked, and have been the heartbeat of the band ever since. Since this partnership the band has grown their presence online and in person. More recently, after finding a breath of fresh air in their music journey, they released a music video for their latest song, On The Water.

After the success of On The Water, Fate Under Fire began working on their new EP, 'What Dreams Are Made Of'. The EP is due out on June 18th.

The album is produced by singer/songwriter David James and ZOOmania's Jeremy Smith, mixed by Eric Robinson (Taylor Swift, Natasha Bedingfield, Brooke Fraser) and mastered by Eric Boulanger (One Republic, Plain White Ts, Colbie Caillat), with six new songs that feature the band's signature chants, big drums and pop vocal sound. "This album perfectly captures the sound, spirit and intensity of David and the band," said Smith. "The band has a ton of momentum right now, and these new songs will be fuel on the fire." "Getting Jeremy's head in on these songs was really a step in the right direction. I'm really satisfied and excited for future endeavors," said James. "I'm really proud of these songs, and glad to get them out there, but I'm really touched with the cover art that features a horse my late mom painted when she was my age. It's a little tribute to her." Fate Under Fire has been on a roll. The band recently won the Freshman Five competition on mtvU, and their music video for nationally acclaimed single, "On The Water" is on regular rotation on MTV Networks. The video has also been featured on FUSE Networks and Uplifting Entertainment.