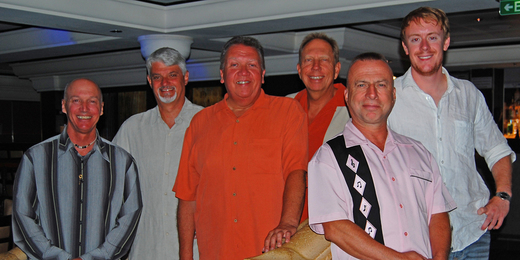 The Fat City Band is a group dedicated to the proposition that music should be fun. It's not that vocalist Paul Redmond can't belt out a tearjerker of a torch song, or the band can't turn out an inspiring rock anthem, but rather that the bulk of their music focuses on providing a soundtrack for good times.

Fat City operates most often in that territory where the roots of rock and roll were formed, with rhythm and blues, swing, jump blues, New Orleans gumbo and boogie woogie all meshing together in some smoky roadhouse jam session. It might be amazing to first time listeners to realize the band is doing original music here, so wonderfully do they capture the essence of the best of their forebears. If Louis Jordan were still alive he'd be a Fat City Band fan---heck, he might even have Redmond's job. But like Jordan's own music, the Fat City Band sound can be tagged with many different labels---rock, jazz, r&b, swing, jump blues---yet the best way to describe it is music that demands you have fun. The lights are low, spirits are high, there's room on the dance floor for you and that special someone, and this is the band that's going to make sure you make a fool of yourself. It's something we all need to do from time to time, and with the Fat City Band leading the way, the highway to hedonism is dead ahead.