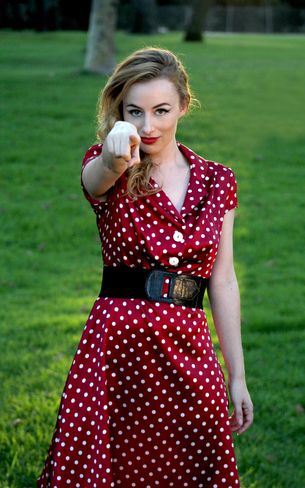 Born in the tiny, icy Kingdom of Denmark, Scandinavia, Emma one day decided to quit her manager job in a Copenhagen theater restaurant, pack her bags and move to Los Angeles.

Emma is a songstress with a mission.

She strives to show the world the wonders that arise when combining good ol´ American country rock with Scandinavian folk/pop. Her recent release of the EP 'Southerns Songs from the North' is a result of this mission.

Emma's unique, sultry voice matches her intense charisma and stage performance. She uses it to add new dimensions to the music and to mesmerize her audience.

Her resumé is as diverse and impressive as her talent and performance style.

She has performed at an array of popular Hollywood venues as well as toured in Asia and the Middle East: She paid her dues in China, - performing six days a week, four sets a night in a smoky Beijing night club for four months straight.

She is now back in Los Angeles to write more of her alluring songs and hopes to both intrigue and inspire America with her God given talent.

With a Norwegian mother and a Danish father, it is no wonder that Emma’s stage performance is sometimes described as feisty and fervent. Her Scandinavian blood makes her ”The Uncrowned Viking Princess of Country Music.”