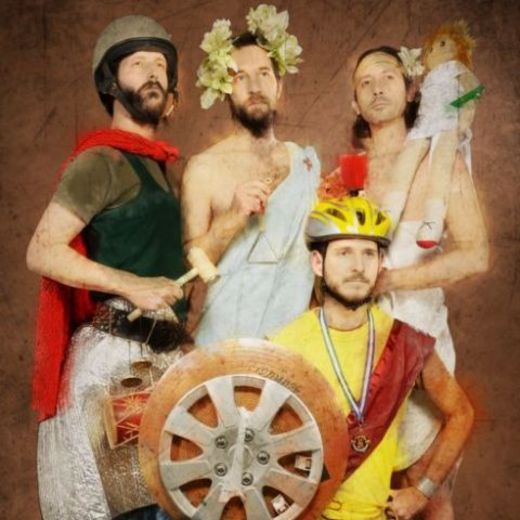 About The Raw Men Empire

The Raw Men Empire is an acclaimed indie-folk band based in Israel.

During its past European tours, the band showcased for the prestigious Reeperbahn and Popkomm festivals (Germany). It was also selected for leading US showcase festivals CMJ 2012 (NY) and SXSW 2012 (TX).

Jokingly referring to their style as "Pop Dylan", The Raw Men have been compared to the likes of Devendra Banhart and Joanna Newsom, as well as anti-folk artist Jeffrey Lewis, for whom they opened during the Israeli leg of his tour.

Their live shows are always a happy and kicking event. Although they are mainly acoustic, they always manage to create a rocking experience thanks to their highly original arrangements and unique interaction with the audience.

The Raw Men have released two EPs, The Rise and Fall of (2009) and Elodie (2010), which got rave reviews both in Israel and abroad ("Charmingly lo-fi and unbashedly earnest" - The Prague Post, Czech Republic; "Delightful songs... smart arrangements with fantastic melodic ideas" - Gazeta Wyborcza, Poland). They collaborated with British pop mega star Daniel Bedingfield and won Best Music award in 2010 SmallBama theater festival. Currently they are recording their next release, due in late 2012.

It's happy music for sad people, and vice versa.

"A promising Israeli freak-folk band... cute and inventive... well worth your attention"-- TimeOut

"Their new EP lasts for only 15 minutes, but it has more content and freshness than most full length albums in the Israeli indie music scene... a wonderful work of art"-- Ha'aretz