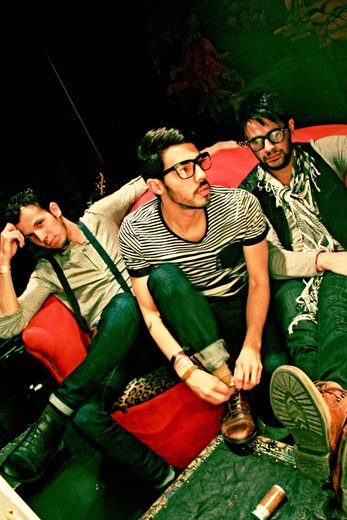 7 years ago a young indie-rock band known as 'Radial' became a word of mouth phenomenon in the local rock scene. A fan base quickly began to emerge as people saw their commitment for creating refreshing and captivating music. In response to their audience, Radial began presenting themselves in important venues all across Puerto Rico with important artists such as Black Guayaba, Sí Señor, Polbo and Ignacio Peña.

Radial arrived at Nashville, TN to record their first full length album entitled "Prueba a Ver" (2006). The positive response to the record allowed for 6 of the eleven tracks to be heard in different stations.

Radial has had various massive events such as their first cd release party at the Hard Rock Cafe San Juan (Sold Out) and the release of their ep "Flores y Fantasmas" (2009) at the Puerto Rico Museum of Art and a college tour with the campaign "Que nos pasa puerto rico?", which culminated in the Bellas Artes Theatre in San Juan. These events were covered by major media outlets in Puerto Rico.

After a couple of years of touring and playing shows across the island Radial went back into the studio to work with producer Aaron Marsh (Copeland, HollyAnn, The Myriad). Their sophomore album is entitled "Un Día Extraño" and was recorded in Lakeland, FL in the summer of 2010.

"Un Día Extraño" was released summer 2011 and the first single "Que tengo que ofrecerte" reached over 11'000 views on youtube and the video was solicited by MTV TR3s for their programming. As a part of their media tour Radial appeared on important TV networks such as Univision, Telemundo and Wapa America.

Along with the release of "Un Día Extraño" came a string of pleasant surprises. Such as the acknowledgment and support and important artists such as Tommy Torres, Jesse and Joy, Juanes amongst others. Various radio stations and magazines from across Latin America have written positive reviews of "Un Dia Extraño". Radial has received thousands of messages from followers in Latin America asking for a vista from the young band.

In the Fall of 2011 the members of Radial moved to Los Angeles, CA seeking new opportunities in the broader Latin American market. Since their arrival, Radial has played twice in the House of Blues Hollywood and other important venues in Los Angeles. Recently they were invited to play in Tijuana, MX where they surprised many with their performance opening the door for future presentations in Mexico City and Guadalajara.