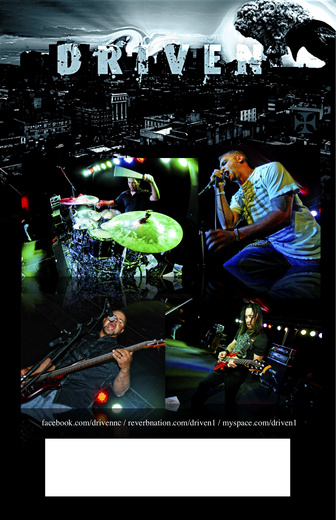 Driven formed in 2001 as a modern hard rock band with a style truly their own, from Pembroke NC. Members include,Mark McKinney on vocals,Rod Locklear on drums, Jesse Jones on guitar, and Joe Locklear on bass and backing vocals.
Driven independently released their first studio E.P entitled ELEVEN:11,in 2006, which lead to a strong following and live shows which ultimately deemed the band worthy of playing with national acts such as 10 YEARS,HOOBASTANK,SMILE EMPTY SOUL, and THE EXIES, to name a few.
With their up and coming release REDEEMER,Driven teamed up with well known producer Jamie King ( Between The Buried And Me/He Is Legend) to put together an undeniable album.. Expectations for the new album set high,they plan on touring the nation to get their music to the masses.
If you would like to see what DRIVEN is doing,or where they are playing next, go to www.myspace.com/driven1 or facebook.com/drivennc