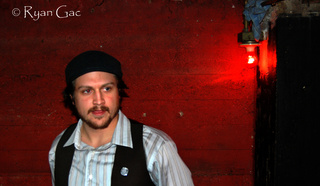 Donnie Biggins is a Folk Singer/Songwriter establishing himself in the Chicago music scene.

His first public appearance was at The Chicago Bluegrass and Blues Festival where he opened the inaugural fest's main stage for The David Grisman Quartet and The Avett Brothers.

He recently collaborated with friend and fellow songwriter, Paul Gulyas, to create The Shams.