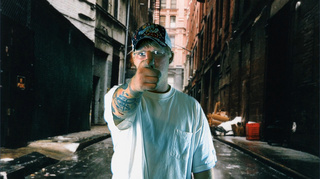 Dolla Green, a Bowling Green native (born Rickey Joe Green) has been gaining ground and making quite an impact on the hip-hop community throughout the southern & midwest regions of the U.S. With top-notch sound and video production Dolla Green is truly proving himself a force to be reckoned with.

With such emotion-packed compositions as the hit single "Behind Blue Eyez" Dolla Green is sure to keep gaining momentum as he works towards the successful completion of his currently untitled debut solo album. Dolla demonstrates a flawless style with a versatility that is hard to match. At the push of a button Dolla can take you from wiping tears from your face to being ready to party like it's 1999 all over again. In his fun-loving summer anthem "Kuttin Up" Dolla delivers superb lyrical flexibility and skill with a sarcastic and humorous presentation.

"My goal with this current project is to create a piece of work that engulfs all of what hip-hop represents while demonstrating my ability to do so; and to do it well!"

I truly believe the best is yet to come from this up-and-coming hip-hop phenomenon.

Raised in a single-parent home Dolla and his teenage mother developed an unbreakable bond.

"It's kind of like we grew up together" Dolla stated when asked about their relationship. The pair were no strangers to difficult times. Dolla states "I remember coming home from school several times to find her hysterical; crying on the couch. Other times I would come home to find a loaded-down car and realize we were moving again." Dolla's relationship with his mother was rooted in the pain they shared in their poverty-stricken existence.

This ongoing lifestyle coupled with the beginning of his middle school years were further life-changing by the introduction of drugs, which culminated in the creation of a "hustler". At the early age of thirteen and knowing well the pains and frustrations of doing without, Dolla was already looking for ways to get ahead. With a grin Dolla continued:

"I sold my first sack of weed for three dollars and went straight to the snack machine and spent it all. I remember that like it was yesterday. I was hooked from that point on."

Dolla recollects “I wrote my first song after being moved by Mystikal on his album "Unpredictable".

"He rapped really fast and when I realized how easy it was for me to memorize his verses and then spit them with him word for word, I knew that’s what I was supposed to do! From then on, if I was awake, I was writing."

According to Dolla, "The money eventually got better and so did the drugs!" By his freshman year of high school Dolla was more than your everyday hustler; he was the definition of it. "I remember sitting on my bed with the door locked and counting money with my girlfriend (Ashley) at the time. I had eighteen thousand dollars and had never worked a day in my life. Life was good! I mean, I was only seventeen years old!!!"

Unfortunately his run was almost at an end. At the age of fifteen he tried meth for the first time. He recalls "That’s all it took man. I was hooked!" After a strong run of dealing in drugs, illegal firearms and many run-ins with the law Dolla remembers the last days.

“Man it got real bad. In 2003 I was convicted of felony trafficking of a controlled substance among many other charges. I was down to a hundred and fifteen pounds, my teeth were rotting from the inside out, the money was gone, my mom was afraid to come home and to top it all off one of my best friends who was living with me at the time chose to take his own life!" A somber Dolla recalls "Man, he was a good dude. I didn't see that one coming".

That was November 17th, 2005. Two weeks later a beat-down, drug-addicted Dolla Green turned himself in to his Parole Officer, admitting to manipulating drug screens. Dolla remembers “I was done man, I was tired of living that way, I was tired of being high; I was just tired man! I remember waking up that day (November 29th, 2005) and going straight to my knees and praying. I just kept saying, 'Please change my life! I'll do anything, please! I can't do this anymore, God please change my life!', over and over again."

Dolla went to prison that day. He was eventually released on May 31, 2006 and has since remained sober and drug-free.

"I have a vision for my life today, one of power and resurrection! This is my second chance! I will not be denied!"

When talking with Dolla about his life today and what direction he plans to go, I can't help but find myself intrigued and deeply moved by the passion in his words. I believe I speak for myself and countless others when I say I can't wait to see what’s to come from this modern day "Cinderella Man".

NOTES:
When asked if he had anything to say to his fans in regards to this interview Dolla simply smiled and replied "DollaGreen.com! POW, Right in the kisser!"