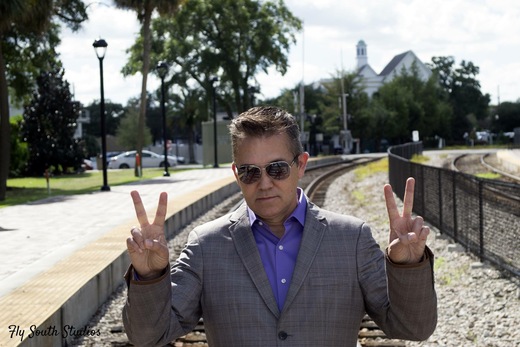 This passionate singer/songwriter brings a positive and upbeat approach to today's music. Craymo is a proud member of the Positive Music Association which helps promote artists and music with a positive message. He recently celebrated over 100,000 web hits on his home page www.craymo.com. Combining the sounds of Modern Rock, Pop and Dance, Craymo weaves a blend of catchy hooks, melodies and textured harmonies that linger in your mind long after the songs are over. Craymo's early influences include David Bowie, The Cars, Morrissey, The Cure, The Beatles, Duran Duran, U2, George Michael and more recently Robbie Williams. Coming from a small town in upstate New York he fell in love with songs that take you on a journey to another place. Craymo is a sensitive artist whose songs speak of real life experiences and emotions. Craymo began his career as a radio and nightclub DJ, the club he was working for went bankrupt, bouncing his last two paychecks, got evicted from his apartment and was homeless for six months living in his compact Mazda car. To help lift his spirits from his circumstances he wrote his song “One Love, One World,” a song that pormotes tolerance, equality and world peace, which is currently featured on the United Nations project UNESCO web site www.newsongsforpeace.org As a result of being on this web site "One Love One World” has been downloaded by teachers who taught it to their students and then performed it at their school’s concerts all across the USA, Canada and recently in China!
Craymo appeared on the original Star Search ‘89 with Ed McMahan. Craymo was a semi-finalist in the pop/rock category of the 2007 UK Songwriting Competition and won 3rd place in the dance/electronic category for his song "Happy Birthday" in the 2006 Pacific Songwriting Competition. He was a finalist for best rock vocalist and best pop rock song (Happy Birthday) in the Artists Undiscovered awards at www.mbstia.com. "Happy Birthday" was also licensed on the season 2 opening episode of the Canadian hit reality show Chris and John To The Rescue and is the theme song for an indie short film entitled Super Southern Sweet Sixteen now playing film festivals! Craymo was a finalist for best song(One Love One World) in the Hollywood Spiritual Film Festival 2005. He recently won the online song competition at Make A Star.com with his song “Love Me Or Leave Me” and won 2nd place in the Remaking The Hit Contest at Goodnight Kiss Music Publishing for his version of “Sara Smile” by Hall & Oates. Craymo recently co-wrote the theme song for the new reality show with comedian Sinbad called “Sinbad’s Reality U." Craymo and his band have been playing the LA club scene, opening a show for Smashmouth and also performed at the Sing Out For AIDS benefit concert in St. petersburg, Florida along with indie girl group Betty who sing the theme from Showtime's The L Word. Craymo has licensed songs in five indie film soundtracks including Silly Movie 2 with Eric Roberts and Michael Jackson, Succesful Failures 2, That Darn Bear, with Ed Begley Jr., Paper Thin Immortals and Accidents Can Happen which stars Corbin Bernson and Debra Wilson (MADTV). Craymo has two CD's available on iTunes!