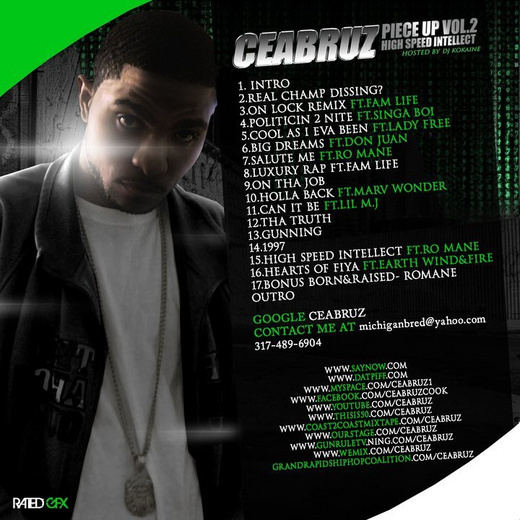 Ceabruz he was named that by his late uncle bobby joe cook real name (Ceasar Cook)the nickname was dubbed up on him when he waz 1yr of age he was very hard headed as a child raised in (Grand Rapids michigan) his mother traveled alot from georgia to florida to indiana and back to grand rapids so he is no stranger to traveling.Just like most young black teens growin up in the 90's he faced alot of obstacles in his life early raised on grandrapids southeast side of town between barth and wealthy he saw alot things go down no need to explain the pain beacuse it's in his music from the flow delivery to the lyrical tracks that he displays and his i will up lift the whole entire hip hop nation attitude. As he continued to mature so did his music and his intellectual side of life he decided to leave the streets alone so he can pursue bigger and better things just like his fellow grand rapids michiganders have done before him Floyd Mayweather,Adina Howard,Al Green,Debarge etc. the list goes on so get ready for something very special intoducing Ceabruz!