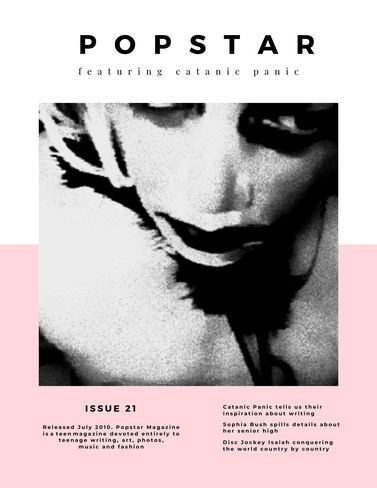 CATANIC PANIC (Musical Band) experimental/electronic/visual Catanic Panic is best described as a far-out effort basking in valuable musical and visual experimentation, though maybe naive to most music buffs. The band is staged as two members who take part in vocals, the shepherding of computer manufactured lead vocals, and the instrumentation composed by Kevin Macleod. Solo-artist Alexis Pena Goco understatedly sets his male residence behind ingénue "Catanic" whom he personifies, and avails as the lead presence executing this by adorning upon himself - femme accents off the beaten path of cross-dressing coupled as a social guise and masquerade. Dak Eyece steps in as the male counterpart and idol when availed with in-person exposure. Consecutive to their theatrical presence is thier trickling robotic, computer vocals that "they" ("Alexis" and alter ego "Catanic") mime with a sort of chanting, with under-breathful murmurs - or singing? - maybe so and yielding a homogeneous and notable musical product.. "In the earlier days Alexis' intent was that he develop a solo act, producing what he called "electronic poetry"; his product resolved as something more musical than he expected, and formed the band Catanic Panic."