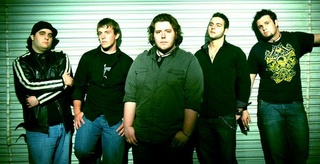 Broka's Bliss is a hard-hitting rhapsody of force-fed guitars with an undercurrent of hypnotic rhythms, highlighted by a youthful vocal, manically flipping like a switch from soaring to searing. Fused with a softer side that is unafraid of serenading it's listener into a swooning trance, this Texas-spawned quintet can capture the imagination of any audience. Lyrically, Broka's Bliss represents everything from the classic grungy angst, to a wise-beyond-your-years plea of hope for the disenchanted masses.

Originally formed from the creative minds of Joshua Mather and Brendan Gilman, the group soon accumulated bassist Casey Mitchell, followed by drummer AJ Neves, and is rounded out by their newest member, guitarist Caleb Benton. Five individuals from five different backgrounds coming together with one express goal in mind: to connect with their audience in the best way they know how - rock music.

Determined to fill the void in the modern music scene, Broka's Bliss is doing anything and everything possible to make their voices heard. "We're not trying to reinvent the wheel, here," says singer Josh Mather, "I just want to write GOOD music. Period." Now, through hard work, dedication and support from friends, fans and family alike, the boys of Broka's Bliss are climbing their way to new heights and finding their home under the aureate, luminous lights of a stage near you.