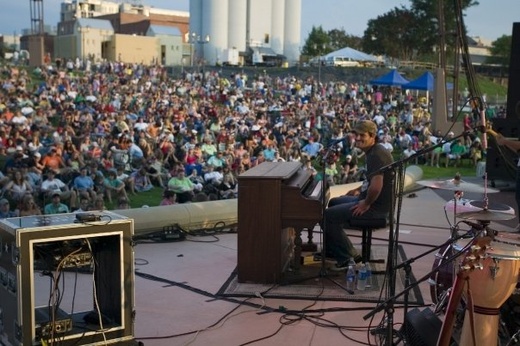 Singer-songwriter, Brandon Kelley, was set on creating a dynamic new sound. Brandon was determined to set his own musical foundation on a road well worn by musicians before him. Growing up in Alabama, the son of a minister he was influenced by gospel music early in his life. In college Brandon began his musical career by honing his talent in the piano practice rooms late at night. What he developed was a style all his own, which brings the gospel feel, mixed with soul, and solidified with rock/pop. Catching the attention of MTV Brandon received high acclaim. “…he sounds amazing, I can’t wait to see him live…” says Jessica Messier from MTV music and talent development. Vocally Brandon has set himself apart by bringing a smooth, soulful melody that can set listeners at ease. “Incredible voice…” Steve Greenberg, President Columbia Records. In the beginning, he played mostly local venues in Alabama and Florida. As his experience grew, so did his aspirations to take songwriting and music to the next level. In the latter part of 2000, he made a conscience decision to move to Nashville in order to expand the number of performance and recording opportunities.

Living in the studio, creating demo after demo with highly regarded producers from all sides of the globe, Brandon found the record he wanted to make and finally began production on his debut album. “How Love Goes,” Brandon’s debut record, was released in the summer of 2007. The single “How Love Goes” went to the top of regional radio play in a matter of weeks. “We received a huge response immediately after putting the single on our morning show and the calls haven’t stopped. Brandon’s music is catchy and will have you singing along by the second chorus.” Kelly Galore, morning co-host of WKMX 106.7 Dothan, Al, tells us.
In November 2009 Brandon released his label debut “Another You”. “This record was fun to write, I wrote most of it on the road which was a new experience for me”, Brandon states. A few songs were brought over from his independent release including the hit song “How Love Goes.” Brandon tells us, “We re-cut a few songs from the first record changing tempo and production on them. After playing these songs on the road they kind of take on a new persona, so we tried to recapture that feel on this record.”

Performing in front of wall-to-wall crowds has given Brandon the exposure and acclaim his live shows warrant. In his young career Brandon has shared venues with Counting Crows, John Mayer, Adelayda, Dexter Freebish, Jason Mraz, and Three doors down to name a few. Brandon has also opened for CCM artists such as Chris Rice, Big Tent Revival, and Darrell Evans. Brandon has built a solid reputation in his performances as described by Josh West, Manager Hard Rock Café, Nashville, TN. He calls Brandon "the best artist to play here in years.” Dan Keen, Vice-President of ASCAP, elaborates on Brandon by saying, "Brandon's songs can be enjoyed by all listeners, he inspires you to want to pick up a pen and write a song of your own.” The best way to find out more about Brandon is to check out his website, BrandonKelley.com.