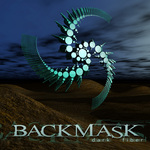 BACKMASK began in 2001 when vocalist/guitarist Shane McFee released a self-produced demo to recruit band members. Quickly developing a local following with their furious live onslaught, BACKMASK then secured global notoriety with a #1 charting song on mp3.com in 2002. After relentless regional touring in their home state of California, BACKMASK followed up in 2004 with a 5-song EP produced by Kurt Howell, which earned the band strong reviews and label interest

After the departure of BACKMASK's original bassist and drummer in 2005 due to creative differences, Shane McFee forged ahead with the project, writing and recording new songs. With the addition of bassist Richard Chapleau (ex-The Day After) in 2006, BACKMASK recorded and released the self-produced full-length album Dark Fiber. With influences ranging from Rush to In Flames, Led Zeppelin to Soilwork, BACKMASK strives to shed classification with this debut release

In early 2007, Shane and Richard recruited a second guitarist and drummer for the touring lineup of BACKMASK, and played a slew of dates up and down the California coast. Coincidentally, Shane and Richard both married their longtime girlfriends during the first half of September, and Shane bought a house. The band took a much-needed six month break.

Rejuvinated, BACKMASK are currently writing and recording the follow-up album to Dark Fiber and rehearsing for more live shows.