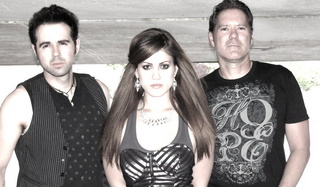 Anthym is the hardest rocking family band in New Mexico.

"Anythm" began in the late summer of 2004 under the original name "Vital Signs." We believe we are unique in rock music because our trio consists of a father, a son, and a daughter. Literally, we are the family that "plays" together, our "play" is our music.

We began as many bands do- writing songs and putting on shows in our garage. Shortly after, we began playing gigs at local venues in Albuquerque, NM including The Launchpad and The Compound, and winning several local Battle of the Bands.

In February/March of 2010, we changed our name to "Anthym" and recorded our first album, "This Side Down," at Eagle Rock studios in Albuquerque.

So far, we have had a great response and are looking to take the next step. We believe in our music and ourselves. We know we can perform our music live and with confidence.

Michelle Geissler (22): Michelle is the bass player and lead vocalist. She graduated from the University of New Mexico in December 2010 with a degree in Advertising and Professional Writing. She helps write many of the lyrics for the band, and designed the artwork for the album.

Mike Geissler (46): High school English teacher by day, rock drummer by night. You can't fabricate a story like that! Many of Mike's current and past students make up a considerable amount of the band's fan base. He also helps with the lyrics and handles the "management" of Anthym.

Michael Geissler (25): Michael is the lead guitarist and background vocalist. Michael can play all the instruments and the keyboards if necessary. He is blessed with natural talent and writes most of the songs. He is a showman on stage and knows how to excite an audience.