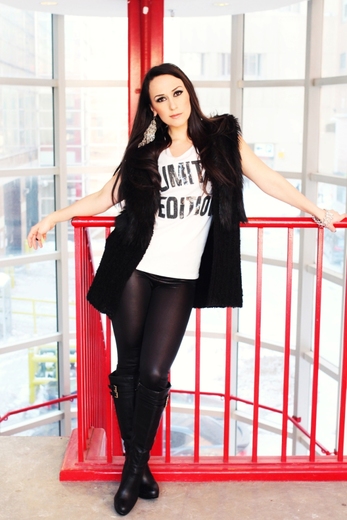 Andrea Godin is a 22-year-old Pop/Dance/R&B recording artist from Ontario, Canada. She always knew that she would grow up to be a singer and after her first performance at the age of 11, she couldn’t wait to get started on her career.

In January 2012, Andrea released her pop/dance single, “Need a Minute”, followed by the May release of her dancefloor ready house collaboration “I Love Miami” with Toronto DJ/Producer Cajjmere Wray. Both songs can be heard on radio, in nightclubs, and seen on blogs and websites worldwide. The music video for “Need A Minute” was released in February 2012. In September 2010, Andrea released her debut EP, followed by her single, “Bullet”, which were also a success on the airwaves.

Andrea’s original songs have been published on national television (City TV & OMNI) and in November 2011, Andrea was nominated for Pop Recording of the year in the Hamilton Music Awards for her debut EP “Andrea”. Andrea's influences include artists such as Beyonce, Rihanna, Alicia Keys, and Jojo.

Andrea has been busy showcasing her music along with her backup dancers. She has performed at many venues such as The Rock and Roll Hall of Fame in Cleveland, The Grand ‘Ole Opry in Nashville, and Toronto venues Devil’s Martini (headliner), The Rivoli, The Opera House, and The Mod Club as well as television (CTV, Roger’s, All Access Television).

Andrea has been interviewed by many magazines, television shows, and radio stations and continues to promote her music. She is currently performing live, recording some great new music, and is anticipating many exciting things come!