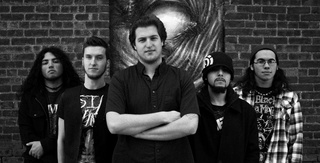 About Among the Dead

Among The Dead is an uprising Metal Progressive band originating from the Hudson Valley community. The bands members including Joe Giovinazzo (Vocals), Robbie Rutigliano (Drums), Matthew Pantano (Bass/Vocals), Andrew Thomas (Guitars), and Billy Wassweiler, push out an original sound that is otherwise not heard in most metal music in today's industry, and is promised to give you an in your face attitude.

The band has seen numerous recognitions from local venues around the Hudson valley, as well as various music related websites, their new song releases hitting #1 in the metal category on purevolume.com, and their early release of This Day in Dying Arms, hitting number #14 on the metal charts of ourstage.com. Among The Dead is also getting city presence as well, performing in city venues such as Webster Hall in Manhattan New York.

Among The Dead's song structures feature very fast pace and in your face verses, going into very melodic and catchy choruses, with an even mix of aggressive vocals and clear soothing vocals. Every song from Among The Dead is sure to leave you humming the melody and singing along with every chorus, catching your heart and taking your soul onto a musical journey, not otherwise witnessed and heard in the metal progressive scene.