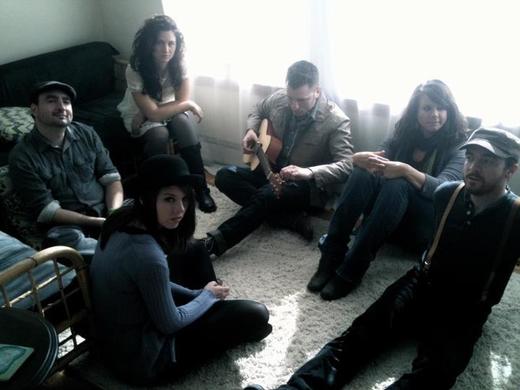 Serving in the US Navy as a real-life air traffic controller, singer/songwriter Dave Munro sent home 4-track demos he had written and recorded during his deployment. With his enlistment up, Munro returned to hometown Boston and discovered an impressive number of fans, prompting the genesis of the aptly-named rock band Air Traffic Controller

With a refreshing, modern day, indie rock sound resembling The Decemberists, ATC further infuses its compositions with unforgettable pop sensibilities in the vein of Petty, McCartney, and Springsteen. Munro keeps it honest, with autobiographical lyrics and well-crafted storytelling reminiscent of classic singer/songwriters such as Paul Simon and Cat Stevens

One of Dave’s demos reached LA-based singer/songwriter and record producer Bleu. Munro states; “I was floored to find out one of my musical heroes wanted to produce us. With Bleu onboard, the production is much more epic” and in December of 2009 the band released its debut album, The One to a zealous audience. Accolades and award nominations soon followed, as did airplay on tastemaker radio stations such as 92.5 The River and WFNX, as well as positive coverage in publications such as Business Week, Performer Magazine, The Boston Globe, and The Boston Phoenix

Nominated for an MTV “Best Break-Out Artist” Video Music Award in late 2009 and winner of "Best Indie Rock Act" of the 2010 Boston Music Conference, Air Traffic Controller soon found itself on many of the Northeast media outlet's Best-Of lists

Fast forward to 2011, Air Traffic Controller were ready for round two with Bleu. Having a home-run success on Kickstarter and raising over $12k to support the production of “Nordo” – the team set out and made a brilliant All-American Indie Pop record that can call up musical references to Arcade Fire, Mumford & Sons and Brendan Benson. Taking advantage of band member Steve Scott’s experience with composing, the band went the distance and recorded a forty piece orchestra on the song “Blame.” This new album also features band member Casey Sullivan singing on two duets “You Know Me” and “Any Way.”

This year, the band has debuted songs from “Nordo” around New England in venues like the Tupelo Music Hall in NH, Acoustic Long Island, and Boston’s legendary singer-songwriter venue Club Passim. Dave and members of Air Traffic Controller were hand-picked by WERS and Reykjavik Calling to play with Eli “Paperboy” Reed and Will Dailey at The Paradise Rock Club for an unforgettable evening of collaborations with Iceland’s top emerging artists. WXRV has also hand picked the band to perform at the historic 92.5 the River Music Hall for their series Live In The River Music Hall which will air on the station and on Comcast On Demand starting in May

The band’s music has been used by Disney World Resorts, Ecko and Hollister stores worldwide, and licensed to Lincoln/Mercury, NBC Television, USA and CW Networks. The band will also have a featured musical intro in an upcoming episode of MTV’s scripted show Inbetweeners. WERS Radio calls Air Traffic Controller “One of Boston's finest independent bands” and during the height of The One’s radio campaign the band’s debut became one of the top three most-added albums on college radio stations nationwide

The band features Dave Munro on lead vocals and guitar; multi-instrumentalist Steve Scott on lead guitar, keys, and more; big brother Richie Munro on drums; Casey Sullivan on bass, banjo, and backing vocals; with violinist Alison Shipton and Kiara Perico on viola. The band often performs live accompanied on stage by an entire string section to capture and recreate its brilliant, full sound... one that consistently identifies Air Traffic Controller as one of the fastest rising original acts in the country.