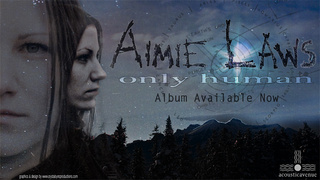 Aimie Laws - (Alt/Rock/Roots)
From the shadows to the sky comes Aimie Laws, a homegrown Independent Songstress from Salmon Arm, BC. With her potent vocals she often leaves people lingering with Goosebumps from her contagious sound. Aimie is one of those rare people who are very raw but very real. She sings from her gut and writes from her heart. Influences of real life and the hard ship it can bring, along with love, lust, and hard stubbornness are some of the many things Aimie confronts in her music. With the release of her first album “Only Human” (August 2010) and the “Only Human Tour – The Road to Ottawa” (October 2010) now under her belt she is continuously striving to share her music to those most in need of comfort from the battles in love, loss, and loneliness. Aimie Laws is a self taught guitarist, writer, and singer who learned everything she knows from her very own trial and error. The mistakes that were often made, which left feelings of insecurities and regret; have now grown into passionate songs of truth and strength that created and inspired her first album “Only Human”.
www.aimielaws.com