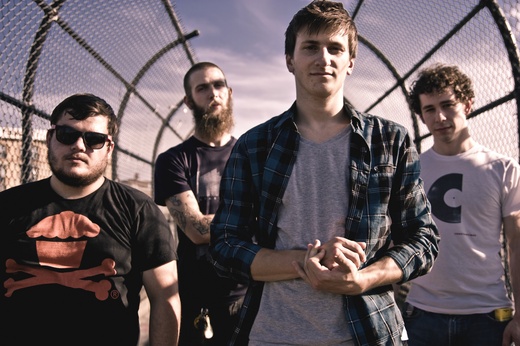 Actor|Observer is a post-hardcore band that formed in the seacoast woods of New Hampshire in February 2010. Now based out of Boston, they are trying to play out as much as possible between having jobs and going to college. Their debut album, The Carbon Date EP was released online on August 8th 2011, which is just the beginning. The guys have big plans for this band, including their next EP, prodced by Jeremy Comitas (Four Year Strong, Chiodos, Senses Fail), due out this Winter.  Contact actorobserver@gmail.com for shows, offers, or more info

Here's an article from the Huntington News that says a little more about A|O and where they come from as a band:
"As far as the band members of Boston-based post-hardcore band Actor|Observer are concerned, the bands and the audience are of equal importance at hardcore shows.
“We want to convey the idea of ‘without you, there’s no us’. It’s a way to talk about the hardcore scene in general,” said Alex Paul, 25, guitarist and vocalist for the band.
Actor|Observer got its name from the actor-observer bias, a psychological phenomenon that explains the human tendency of imagining that everything bad happens to oneself, as if they are at the center of some tragic play – causing one to act only as outsiders to other people’s problems, said guitarist and singer Greg Marquis, a senior music industry major at Northeastern. Though, for the band, the phrase has taken on a new meaning that instead the actors/musicians and observers/ audience are equals.
The other two members are drummer Dan Bob Goterch, 27, and bassist Brett Colangelo, 22. The band pumps out music that Paul and Marquis believe is perhaps too melodic and progressive to be called ‘hardcore’ – but it was growing up in the local hardcore scene that spurred the band members’ connection. The sounds of that time and place are what propel them to write and perform, Paul said.
“That’s one of the things about hardcore that you just can’t deny – that your blood and tears and sweat should be on the stage every night,” Paul said. “I want to leave the stage panting. We don’t want to give any less than that. Lots of bands, they just stand there and play, and to me it’s like, why didn’t I just stay home and listen to the record?”Both of Marquis’ older brothers have played in Boston hardcore bands – one was a member of Therefore I Am, and the other plays in Vanna. Marquis and Paul said they were inspired by the sense of community at the shows they attended when they were younger.“Therefore I Am were a really positive, down-to-earth band that always showed respect for their fans,” Marquis said. “Between songs, they would express their appreciation for everyone coming out to see them.”
Marquis said he and his cousin look up to his brothers’ bands and they want to continue spreading messages of positivity and fan appreciation.
“What I love about the hardcore scene is the sense of community, it really is a second family,” Colangelo said.
Paul said the act originated two years ago when he and Marquis moved in together and immediately started writing. They contacted other musicians they knew, and became Actor|Observer at the end of last summer.
Since the current lineup formed, they’ve tried to relive their earlier days of going to shows.
“Now that we’ve gotten older, we’re finally getting ourselves into the Boston scene. We’re finding that sense of community we loved almost isn’t there anymore,” Marquis said. “Our goal is to sort of try to recreate that sort of thing – not that we can do it single-handedly, but we’d like to think that we can have some sort of pull to try to make that happen.