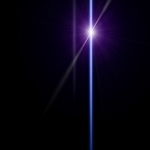 7th DIMENNSION is a modern electronic R'n'R trio composed by Marqus Mars (guitarist, composer and producer), Ilonah a.k.a Ilo (vocalist and songwriter) and computer cohort Buddha 777
Their musical style has been acclaimed for combining the best elements of industrial, techno and dance with a definite rock band feel. It's sharp, imaginative visionary with hard-edged electricity
Although Ilonah and Marqus Mars were both born and raised in Poland, the band was formed in New York. Since 1995 7th Dimennsion was a frequent and exciting act on stages of New York City clubs. In that time the band engaged in many small studio projects and video productions for Manhattan New York New Rock cable TV. Technology changed and 7th Dimennsion started recording its album "Sex, Light and Rock'n'Roll" in an underground shelter called "RubyMagicStudio" in a rented apartment in Queens, NY, they once shared as roommates
"Sex, Light and Rock'n'Roll" album is a collection of tracks, that takes a new approach to rock'n'roll music and its message, combining mysticism and spitituality with the powerful message of Love into Total R'n'R blast
Released in April 2004.