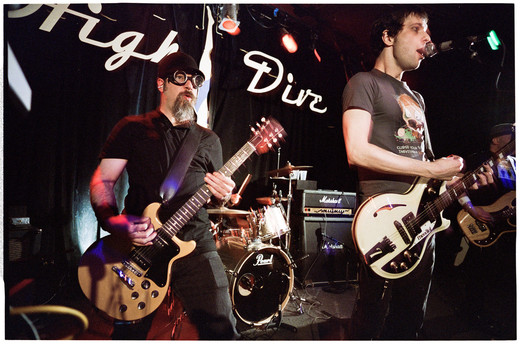 Drawing from 80s post-punk sounds of the Buzzcocks, Placebo, and Manic Street Preachers, Post Adolescence and their album “My Nothing” demonstrate a British Post-Punk-Glam sound that belongs only to them. These pure pop sounds find the “young and angry” pleasure center for which all of us lust. In the truest sense, they are at the leading edge of the next wave of the post-modern rock movement. Post Adolescence is not a catastrophe of stupidity or of freaks of nature, rather it is a testament to dudes who get along, have fun, and want to rock. Coming of age in his previous band, Johnny Straube found British and modern rock-influenced drummer Brian McCrossen and, with pop-influenced bass player Gar Hooker, became Post Adolescence. The band took to the stage for the next couple years, grinding away, asking its loyalists to wait until it was time to make a record worthy of their namesake. After time served and becoming, in the words of Straube, “proof a band doesn’t have to hate each other to make good music,” they headed into the studio to keep promises and make a record. During 2009-2010, realizing Post Adolescence had a chance to “do something different,” Straube, McCrossen, and Hooker recorded the album “My Nothing,” a multi-dimensional proof of a band not imbued with a “just do it,” make-a-record bull. Under the influence of producer Mark Clem, the trio developed greater musicianship and enhanced the nature of Post Adolescence. They had finally achieved a full frontal rock of their own. Once the hyperactivity of the band's molecules were wrangled into order with the help of Clem, they looked to add personnel to take “My Nothing” out to fans who were eager to see Post Adolescence. With potential in mind and a necessity for maximum thrust on stage, the trio saw the need for more players. Tapping producer Clem for Jedi guidance and a deeper rhythm section, four was better, but it was clear they needed a fifth. On the lookout for the missing piece, sights soon honed in on former Motorik skills master Adrian Garver, whose world of punk-pop-metal love fell perfectly in-line with the catacoustic impression-makers. With the realization of the long-awaited album “My Nothing” and the blast-off expansion to a quintet, Post Adolescence is set for greatness. Straube, McCrossen, Hooker, Clem, and Garver are pleased to meet you, fill you up with the Post Adolescence's sound, and make you sing along even if you don’t want to. --Chris Woods, 30+show attendee, photographer, and lover of youth and anger!