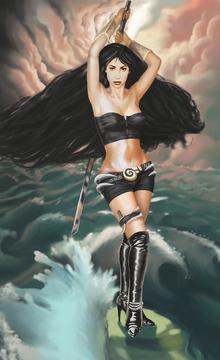 KATHY BEN HAROUSH is an Israeli Rock/ Opera Singer/Songwriter,age 34 from Tel Aviv. Kathy's music style could be described as a combination of Gothic Rock , with Metal,Electronic, Opera, oriental influences and rap core. "Evanescence meets Lincoln Park". Kathy who was classically trained at the Israeli
Music Academy at Tel-Aviv University as a professional Opera singer (Dramatic Mezzo-soprano) , was dying to sing Rock , and so the album Gothic, or rather, Operatic influence was etched.
Uploaded: May 9, 2008
Duration: 4m 13s

Comments for See my sorrow