« See all of MIke Check's Songs 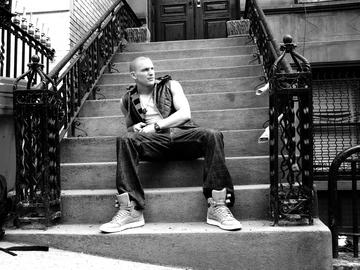 After parting ways from a group recently, Mike Check has made a buzz with his solo career in a short period of time! www.mikecheck1212.com
Uploaded: June 27, 2010
Duration: 6m 38s

Comments for My Back Yard

to Titanblac
I don't see why race is even in the conversation. I think any race is great to represent NYC, especially since it's so demographically mixed with Blacks and Latinos, Asian and White, Indian and European. I don't think it matters where the person is from (bloodline), the music is the only thing that matters. If you might recall, hip hop got huge with black and latinos in the BX. Cmon.
Reminds me of my cousin Dom P (who is also in this contest) who is from NYC, and when he get's up on stage in spanish venues or people know he's spanish they expect him to rap some wack sh*t or reggeaton, but they are completely thrown because he is incredibly nice. They always compare him to Drake, but a much better version of him (according to 100% of the people who say it). NYC has great rappers all around, but it's over-saturated with dudes that think hip hop is just a means to get money unfortunately.
Mike Check, this is a great song and I would like to have you collab with Dom P. Check his page out and let us know if you're down to do something with Music For Daze.
www.domponline.co
Peace and keep making music people!
by djboy on July 27, 2010 at 1:12 PM EDT

yes this clean, chill ass ride out song, smoke one to this one and listen n learn! good work fam
by Jacob 'Demonik' Kleine on July 26, 2010 at 5:36 PM EDT
YO, I AIN'T NO RACIST OR ANYTHING LIKE THAT; BUT THIS IS A DAMN SHAME, THAT I WHITE BOY(OR PUERTO-RICAN) IS REPRESENTIN NEW YORK, BETTER THAN ALOT OF YOU FAKE MC'S, STAYING TRUE TO THE GAME; AND NOT TRYING TO SOUND HE'S FROM SOMEWHERE-ELSE. ON TOP OF THAT, HOMIE IS KICKIN A MESSAGE. THIS SH!T IS TRUE HIP HOP, BEYOND THE SHADOW OF A DOUBT. SHAME ON NEW YORK CITY AND ALOT OF THEIR UPCOMIN FAKE MC'S. BIG-UP'S TO THIS THIS CAT(WHOEVER HE IS)FOR STAYING TRUE TO HIMSELF AND THE GAME. FROM THE GENIUS: "BLACK TITANIUM"
by TITANBLACK on July 25, 2010 at 4:19 AM EDT