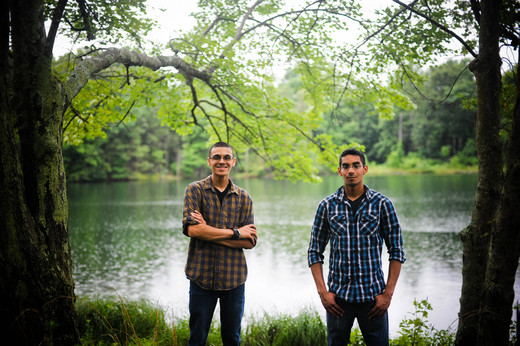 In the spring of 2012, Marc & Shane were paired together by an event coordinator to perform as entertainment at a school event. The two met and Marc suggested the two perform a cover of Fleetwood Mac's, "Landslide." Shane went home to learn the song and the next day the two met at Shane's home to rehearse.
"There we were in Shane's basement," explains Marc. "We were practicing for this school event, that we thought would be our one and only performance, but fate had other plans. Our synergy made its debut that night, we were able to realize how much we had in common artistically and also on a personal note."
The two nailed the song in their first try. After going through the song a few more times, the two went on to discussing their musical likes and dislikes, their favorite artists, and they also discussed their own means of inspiration and original music.
"What I thought was going to be a half hour rehearsal turned into a three hour conversation, and also one of the best nights of my life," says Marc.
After their performance of "Landslide," the two continued to meet and they also began to craft original music together. As the list of original songs continued to grow, the two looked for opportunities to show their songs off in the live setting. Once the two began to perform live and receive a positive reception to their songs, Marc & Shane knew the next step was to hit the studio.
In the summer of 2013, Marc & Shane went into the studio with LVMA award winning producer, Andrew Chervak at the helm. Those sessions resulted in Marc & Shane's debut 5 track EP, New Things Come..

Presently, Marc & Shane continue to craft new material and also perform live. Be sure to check out Marc & Shane's new EP, New Things Come... and also check out their show!