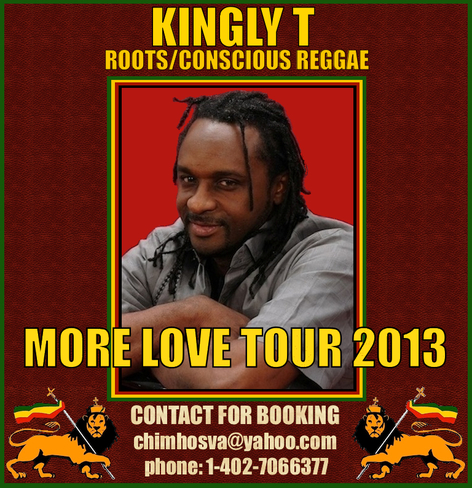 Reggae artist Kingly T. began his musical journey Kingston, Jamaica. It was there that he served as a guitarist for an outfit known as Ninja Force. Kingly T. and other legendary musicians from  the band helped usher in the 90’s music culture and what would be the new face of lyrically driven, uplifting soul and reggae. It is this past experience and his travels throughout a number of different countries including Japan, Mexico, the United States, and the Caribbean that has helped produce a unique sound and dedication to spreading a positive message.After finally settling in the United States, Kingly T. attempted to find a group of like-minded musicians before deciding to pursue a solo career. His first album “Unity” experienced commercial success in 2007, and KinglyT began to fuse his reggae sound with elements of jazz, soul, and other genres. Upon crafting his new style, he released his following album titled “Rock It With Me” in 2010 and two singles in 2011 titled “Eastward Bound”and "Jah Blessing"These breakthrough tracks cemented his new sound and exposed his style to a wealth of listeners via international radio. Following his new level of worldwide exposure, Kingly T. recently released his third studio album titled “Live The Life” in Spring 2013. Focusing on a positive message backed by lyrical intelligence and original arrangements, “Live The Life” is are presentation of all that Whittle has learned through his travels and the level of spirituality that he has been able to reach along the way. At the heart of his new album is above all, the ability to create a mood Recorded at various studios throughout the world, the album shines with diversity. “Live The Life” is an album that provides listeners with clean music that promotes love and spirituality. He has recently performed,in Zimbabwe on October 12 2013,where his very energetic and captivating performance had the people asking for a repeat show.Upcoming Kingly T has in the plans, a number of recording projects and collaborations with international producers and artists,also in the works,are plans for a US tour.Check out “Live The Life” on outlets including Amazon, CD Baby and iTunes, and learn more about theuplifting sound and mentality of Kingly T. on his YouTube(http://www.youtube.com/user/KinglyTmusic) or iTunes page(https://itunes.apple.com/us/artist/kingly-t/id2683879