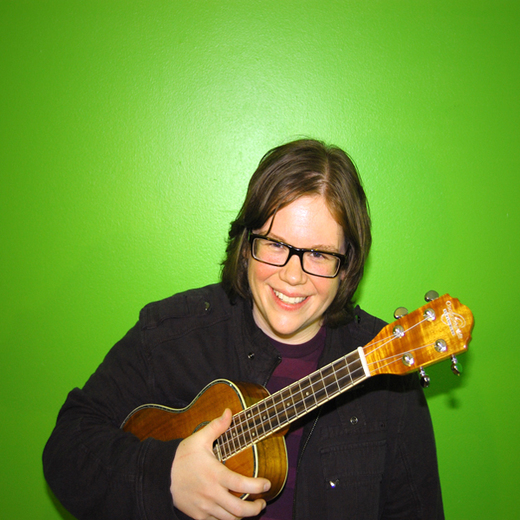 Kara Square is a nerd who will write a song about anything. As half of the duo Team Smile and Nod, she writes personal and political electro folk pop songs. As Mind Map That, she humorously covers topics such as organ donation, fexting (fake texting), cats, coconuts, and poop. Now armed with a ukulele, Kara Square has developed a passion for writing and singing about one of the most explored, universal subjects that exists: love. It occurred to her that as a lesbian, the very act of writing a love song is political. This idea inspired her to create an album that emphasizes relationship similarities, instead of focusing on identity-driven differences. Through her upcoming album, “Love Songs For Everyone But Especially Uke,” she reveals that love is boundless.

“Start Each Day With Love” is the first single from Kara Square’s “Love Songs For Everyone But Especially Uke.” The album is comprised entirely of folk pop ukulele love songs and the first single embodies its’ sugary-sweet feel.

Kara Square’s passion for writing love songs on the ukulele developed over a two-year span of songwriting exploration. Kara started creating comedic songs that didn’t fit the style of her band, Team Smile and Nod (“Look Both Ways Before You Die” [2008], “Mourning Time” [2011], “Dust From the Stars” [upcoming release]). In 2010, she began her solo effort by recording these odd little ditties, making weird little videos to accompany them, and blogging about it as Mind Map That. One of these videos, “How Do Lesbians Have Sex?” now has over 22,000 views on YouTube. “Polydactyl Super Cat” has over 10,000 YouTube views. Her video, “Think About Poop,” won Water For People’s Support a Movement Video Competition in December of 2010.

As Kara recorded her comedy songs, she posted each track’s stems on the Creative Commons remix website ccMixter.org. Since joining ccMixter in June of 2010, her songs have been remixed over 250 times by a talented international community of musicians. Based on her enthusiastic participation on ccMixter and her choice to embrace Creative Commons, she was invited to be an Admin on ccMixter in August of 2011. Her music has been released on many compilation albums including “Free! Music! Sampler Freeloaded” (2010), ccMixter’s “Emergence” (2011), Lawrence Lessig and ccMixter’s “Strike the Root” (2011), and CMR Ohio’s “Occupy Columbus” (2011). Her vocals are featured on acclaimed Turkish musician, Murat Ses’ newest album “Light Cone” (track 2, “Chiral of Past”). A re-mastered collection of her comedy songs will be released in an upcoming album called “Mind Map That: Humorous Songs from Unmappable Territory.”

At some point in 2011, Kara Square wrote a love song instead of a silly comedy song. This switch was exhilarating. She also started playing the ukulele more and more. She felt revitalized while strumming the little instrument. The small neck and nylon strings made it much easier to play with her post-carpal-tunnel-surgery-hands than her former instrument of choice, the acoustic guitar. She also noticed that the sound of the ukulele lifted her spirits. By the end of 2011, she observed that her guitar had been sitting in the corner untouched for six months. Accordingly, the concept for a ukulele love song album was born.

“Start Each Day With Love” is a mushy-gushy, heartfelt folk pop ukulele love song that expresses the importance of love, including the love one should give oneself. It will be officially released with a music video featuring nature footage from Ephemeral Rift, on August 2, 2012. The cover art for the single was designed by one of Kara’s multi-talented ccMixter friends, Joel Frijters from SoundAdvantage. “Start Each Day With Love” captures the universal nature of love and provides a sneak peek of what to expect with Kara Square’s upcoming album release “Love Songs For Everyone But Especially Uke.”