Interlaced in singer-songwriter Jesse Macht’s catchy melodies are an abundance of stories overflowing with passion, vulnerability, empathy and honesty. Much like legendary songwriters before him such as Tom Petty and Neil Young, and modern day influences like Dan Wilson and Jon Brion, Jesse has proven his aptitude for storytelling. His music has been placed in many television shows and networks, as well as commercials, including The Voice, Keeping Up With The Kardashians, Giuliana and Bill, Nickelodeon, Cymbalta and the MTV/E! cable catalogue. He’s also had numerous original songs placed in independent films such as James Franco’s Good Time Max

Los Angeles born and raised, Jesse has followed a path similar to his family of entertainers (his brother is actor Gabriel Macht, currently starring in USA’s Suits, and father is veteran actor Stephen Macht). He has worked hard to make a musical home for himself (both as a solo artist and with his old band Burn Down the Mission) within LA’s well-known songwriter community with regular appearances at the Hotel Café, Room 5 and WitZend. Recently, Jesse was among 12 selected songwriters to participate in ASCAP'S Lester Still Workshop, where he was mentored by the likes of Lindy Robbins, EMAN, Ron Fair, Andrea Von Foerster and Greg Kurstin. Additionally, he was featured as one of ASCAP Nashville’s up-and-coming songwriters at the WE CREATE MUSIC concert series at The Basement.


Jesse Macht connects with his audience through reflective, conversational lyrics. While his words are dynamic and unapologetically truthful at times, he leaves room for his audience to contribute to the dialogue by using their own experiences. “My goal is compassion,” he says, “and my intention is to influence others to dig into their own stories -- to reflect on the actions we take, to own up to our fears and insecurities.” Symbolically, Jesse’s projects act as an exposé of his own independence, insecurities and renowned love for music. “When we are focused to reckon with our monsters, our raw skin is exposed. It’s from there that art and truth lie.

This spring, Jesse Macht will record a new album with producer Justin Tockett (Marc Broussard, Eli Teplin) in Lafayette, Louisiana. “I completely trust Justin and the artistic space he’s created,” he says. “He’s able to access the sound that I have been hearing in my head for years, but couldn’t get out on my own.” The new album, expected to come out in the fall of 2014, follows Jesse’s 2012 debut solo release Acts of Providence. With it, he hopes to continue to inspire his audience and encourage them to be vulnerable. 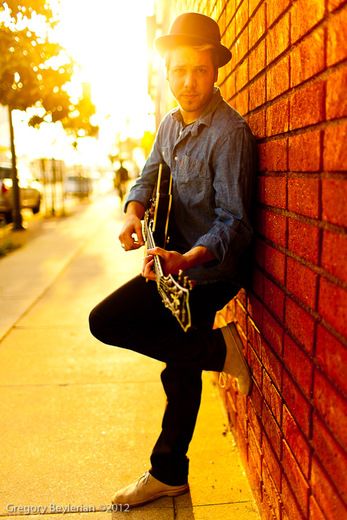