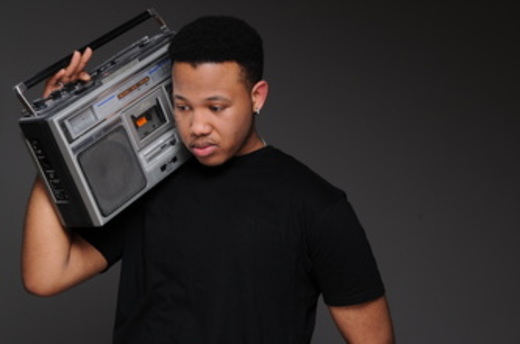 Up and coming London MC & Producer Jaimz has recently released his debut mixtape‘The First Step’. The 18 year old, north London rapper and producer is certainly taking his big first step into the music business, with critics comparing his works to the likes of J. Cole.
Rapping from the age of 14, he was heavily influenced by the likes of 50 Cent, Ludacris and Nas. Although they gave him inspiration, he realised that as he came from the UK, his style and flow needed to authentically represent his London roots.  Being exposed to a wide range of music, his mum’s favourite Lover’s Rock and Soul music to his Dad’s Jazz and Blue heavily influenced Jaimz. But his exposure to Grime was an important revelation as it allowed Jaimz to define his sound. It was the first time he had heard the UK accent sound cool and fashionable with artists such as Wiley, Kano, Dizzee and Chipmunk. He found a sound he could identify with.
However the aggressive, violent themes in Grime failed to inspire him and so he returned to Hip hop for inspiration. Kanye West’s mainstream popularity made a big impression on himas he did not perpetuate the typical‘gangster rapper’ persona. Secondly, in a time were instrumentals wereha rd to come by; Kanye was the first rapper to make it big on his own production.
In 2009 Jaimz recorded his first mixtape ‘Pre-Jamazin’ under the name ‘Juvenile James’ at the Roundhouse studios in Camden.  Jaimz did not promote the mixtape at the time as he preferred to further hone his skills resulting in building a home recording studio and focusing on improving his writing and music production skills on music program Reason 4.Following the completion of ‘The First Step’ Jaimz began performing at various London venues while studying full time for his A Levels. Venues include Camden Rock, The Enterprise, Platform, A spoon full of poison and more.
Showcasing his rapping and production skills in his first video ‘Big Things’, released in September 2011 on SpiffTV, Jaimz is definitely making a name for himself, he Recently performed at Summer of Change event, hosted by SBTV presenter Aaron Bridgeman.
‘The First Step’ offers a blend of music, from the hardcore hip hop such as ‘Big Things’ to the ladies song ‘Can’t Wait. ’Jamiz has solely written and produced The First Step, except for the song‘Can’t get enough of you’ where Jaimz raps over Janet Jackson’s song ‘When We Oooo’. Overall, The First Step is a solid first effort, which will have listeners wanting more.