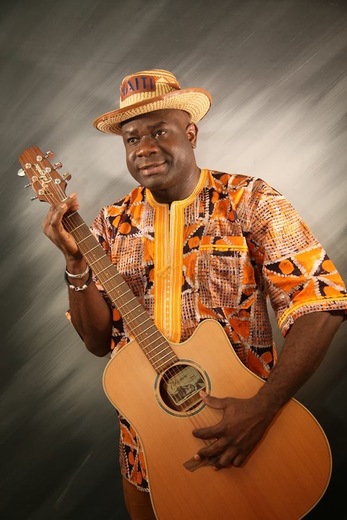 As a singer, songwriter, musician, and performer, Gregory Telfort found his passion for music while growing up in Bahon, Haiti. His success landed him in one of the biggest music capitals of the world- New York City.

Gregory Telfort is a phenomenon in the arena of Konpa whose versatility has gained him popularity in the genre of Reggae and Love Ballade. Gregory’s music is the natural expression of powerful emotions which he combines with proclivity for improvisation and the pleasant, melodious presentation of his guitar. The outstanding qualities of Gregory’s performances are his poise, and incredibly unique ability to breathe life and ingenuity into conventional themes.

In 2001, Gregory Telfort stood first in the annual Konkou Chante Nwel Competition, placing him among the ‘Who’s Who’ in Caribbean music circles. He went on to receive acclaim by Telemax Television for his coveted win and for topping the Haitian music charts. Gregory Telfort has several CD albums to his credit, Belle Haiti and Rêves et Réalités. His vivacity during performances both as an accompanist and as a soloist has achieved him worldwide fame, participating in many international music festivals throughout Europe, United States and Canada.

Gregory Telfort’s passion for music remains unabated. He explains “Music is life with far reaching wings that permeate throughout; it is an abundant, infinite gift that has no borders.”