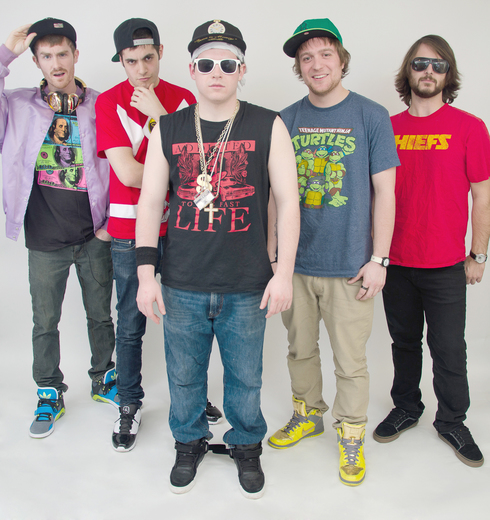 GLi brings its 90’s style to modern pop by blurring the line between electronic music and hip hop. Husky J, BMac, Rare Breed, J(. Y .)$E, and GBlok started out as 5 kids hailing from Philadelphia, Pittsburgh, Sacramento, and Cape Cod that all met their first day of college in Boston. Realizing they had similar tastes in music, the group began playing together several times before formally starting

a band. Since forming in 2008, the group has set out to emulate the sounds of popular music in the mainstream, all while maintaining their own creative influence and style

Green Line Inbound got their start performing in basement keg parties around Boston, and have since been the recurring weekend soundtrack to student parties and campus events at many schools along the east coast. Deciding to take their performance to the next level, the group began performing at local clubs and concert venues in the New England area ranging from 100-2,500 in capacity. With two extended residencies, a number of headlining shows, festival performances, and several shows opening for acts of national acclaim, Green Line Inbound is quickly gaining exposure with their catchy songs and in-your-face live presence

The band currently boasts a 4-song mixtape released January, 2012, with music videos accompanying 2 of the songs. Having been described as a mix between LMFAO and Wiz Khalifa, their music has the right balance of dance, hip-hop, and energy to keep any party going. With a full tour schedule always on their plate, GLi aims to bring their music to colleges and clubs across the country.