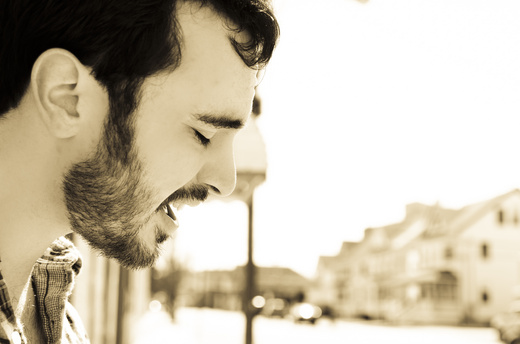 Gerald Edward is committed to the old fashioned way: strings, vocals, community. He pitches in with musicians from the big city to the coast, rattling between acts in Brooklyn and Asbury Park. Apart from his work as a solo artist, he co-founded the indie/folk band Inland Traveler, and lends his guitar and voice to up and coming songwriters like Sydney Wayser and Emily Grove.
After releasing his debut You Write the Words in 2010, Edward began playing solo acoustic shows along the East Coast, eventually leading him back to the studio for his latest release, Side A / Side B. Two separate recording sessions cast the singer/songwriter in different lights. Side A features Edward with his full band, adding layers and colors to the space, while Side B delivers the artist in a stripped down acoustic setting

The sessions took place during the summer of 2011 with producer/engineer Pat Noon (River City Extension, The Stone Lonesome) at Eight16 Recording Studio in Toms River, NJ, with additional tracking at Sounds Like a Fire in Brooklyn, NY with Dan Molad (The Spring Standards, Lucius). The musicians that helped bring the double EP to life are Katie Locke (harmony vocals, keys), Jordan Scannella (upright bass), and Josh Giunta (drums).

“Gerald Edward shows that he’s a master of the more intimate, acoustic singer/songwriter songs…. While his sound is very current, you can often hear influences from rock & roll, folk, and Americana.”

“You Write the Words hits every main variation of guitar-based song, with a breadth of sounds from John Mayer to REM to outright country/folk and back.”

“Edward combines a smooth vocal style and great arrangement with tasteful guitar playing and straight-on lyrics… This young artist has honed his craft to the point where he has a sound that is experienced beyond his years.”