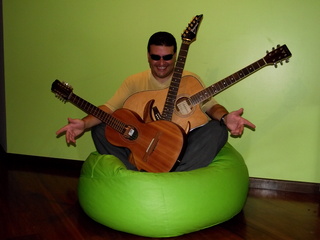 Waves of Influence is the first official album done by this Brazilian guitarist, and every second of this album was done with great care trying to expose all of their creative potential, with entirely unreleased songs and several musical genres.

The main keynote for this album is the diversity, where we can find different styles of music, passing through the heavy metal mixed with guitar work and Viola redneck (Music Sunrise), Rock and progressions for Viola and Guitar with maracatu beats ( Lua Nova ), as well as arrangements of Rock and Blues ( Billy West) and arrangements of funk guitar with a duet for viola and guitar over a samba beat (Manga Rosa).

Waves of influence is the first album (EP) in a series of four EP's to be launched throughout 2010 and 2011, allowing a conceptual division range of the musical variations present in their compositions and allow all the work is published along of its development.

The entire production of this album was performed by himself independently, since the recording, mixing and mastering as well as the composition and played all the string instruments used in the songs of the album, in his small home studio.

“Waves of Influence is an album made with different styles of music, where I composed and played all the arrangements of Rock and Metal, along with sounds and beats typically Brazilian, many guitar solos and special effects that make this album unique.

It is a really good choice for the one who is looking for something transcendent.

The division of work in several EPs, besides facilitating the release of all the songs more quickly, will benefit the fans who may enjoy the work during its development and not have to wait for the complete work is available to the market.

The entire production of this album can be considered a work of art made by hand, with all the passion and inspiration of a musician at heart, with the goal of providing a really fun musical journey, where we can find in a small amount of music, a great musical experience.

Lua Nova Song at Top 10 Musics in Radionline by
Hi Folks!I have a great new today!The Lua Nova Song , are between the Top 10 musics on Radionline site!!!Check it out at : http://www.radionline.com.brCheers!William Wolff
Guitar Idol 2010 Participation! by
Hi Folks!Some weeks ago i made my subscription on the Guitar Idol 2010 contest!I will be very glad to see you there voting for me, and placing your evaluation about my sound!Basically the video is...
Track for e-mail Promotion by
Hi Folks!Trying better comunicate with all the people that come and enjoy the site , i start today another big promo!All the people that fill the form bellow will receive a free copy of the Billy...
p
A
n
E
F
Song Title by Artist Name
987654d
LM
iAnEAqqqq