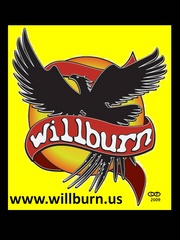 WILLBURN – band formed in a garage back in 2007 from what we can remember. Inspired by the story of the daily grind, our relationships with friends family and the creative musical fire that makes life worthwhile. We are all influenced by the great rock musicians and their ability to expand the dimensions of reality. J & B out of San Jose started crafting songs for over a year and decided to get them burned into plastic. We recorded at Hyde Studios in SF where some of the most dynamic range of musicians had bared there souls throughout the last 30 years. Hired guns included the Stovall sisters, Steve Shufton on piano, Matt Kunitz on organs and Joe Amaral on trumpet. The band spent 8 months on and off in the studio. Producer Bill Cutler and engineer Justin Phelps helped in the development of songs and musicianship on the album.

Tearing it up as much as possible by Willburn, a four-piece pop-rock band, ready to get
Over the years, every time I've been asked to go anywhere, whatever the deal was, I've done it," said Westphal, a veteran Stockton musician who's been performing since he was 11. "I've gotten to...
p
A
n
E
F
Song Title by Artist Name
987654d
LM
iAnEAqqqq