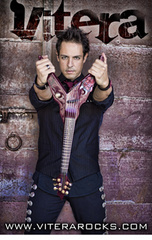 The sonic lovechild of Maná and Guns N’ Roses conceived to the sounds of Santana and born in the land of Crossover, VITERA fuses old-school American rock with Latin grooves and instrumentation as a backdrop for pop rock lyrics in Spanish, English, and Spanglish. The Austin-based band brings a kick-ass Texas edge to Rock Latino blending congas and horns with greasy slide guitar one minute and orchestral strings with fiery rock violin the next. Frontman Haydn Vitera is an extremely versatile vocalist who can growl like David Coverdale or sound as smooth as Luis Miguel. Formerly a member of Grammy-winning Asleep at the Wheel, he is a multi-talented instrumentalist who plays guitar, keys, and most notably, electric violin. His 6-string fretted Viper, introduced by Vitera for the first time into the Latin genre, can sing you a sexy melody then burn out a blistering rock riff rivaling the meanest guitar.

Vitera Spinner SXSW 2010 interview by
Haydn Vitera formed the band that bears his name a few years ago with his brother David. When his brother moved on, Haydn gathered a new group of musicians as Vitera and began to build a following...
Voted #2 in Latin Rock Category Austin Chronicle Music Poll by
Saturday, March 20: 2009-2010 Austin Music Awards
p
A
n
E
F
Song Title by Artist Name
987654d
LM
iAnEAqqqq