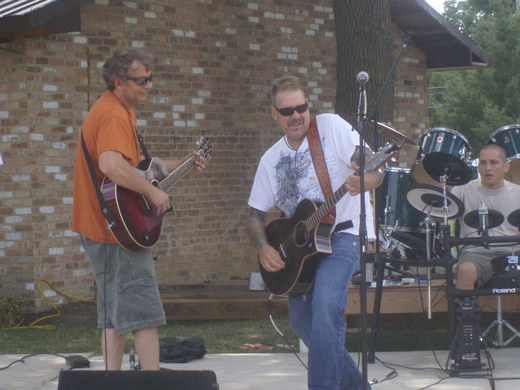 To use my talents and the divine revelation given unto me through music as a way of honestly expressing the healing I've experienced in my life. It is my purpose to continue to sow the seed of faith sown within my heart by my lord and savior Jesus Christ and share that joy with others. Everyday I'm striving to be a living witness of my ever growing testimony in the redeemer of the world. My music speaks of the refuge I have found within him, and the knowledge that there is victory in surrender. Through Christ we can overcome any weakness, and endure any storm.

I'm so grateful today for the sacrifice that has been made for all of us. I haven't always been able to proclaim my love for Jesus Christ. For many years I lived a life driven by my own selfish motives and guided by self-will. Throughout this dark period in my life I experience pain and sorrow stemming from bad decisions. My agony was certainly self induced but I couldn't seem to figure out a different way of living than what I had always known. Finally laying broken on the floor face down in a pool of grief and agony I cried out trembling to God. It was through this revelation that only God could do for me what I could not do for myself that I was pulled from the fire enveloping me- which I had started. This was the first time I truly felt only a fraction of the unconditional love that Christ has for me and the relief that comes along with this recognition. That was the first time I had ever experience love at all. My cries were immediately answered and my first song "Come to Jesus" was the result.

Born and raised in Chicago in 1962, or found under a rock, as my dearly departed mother used to put it, I was forced to grow up rather quickly. My family life consisted of many different forms of abuse and dysfunction. At times it seemed I was on my own and that there was no light at the end of the endless dark tunnel that had become my life. It seemed to be a path only leading to destruction. A path built of behaviors learned from alcoholic parents. Mom gave me my independence, but not by my own choice. She sent me on my way out into the cold cruel world with only the snare drum I had permanently borrowed from my grammar school. My ears were graced with her parting words, "You're no good and you will never amount to anything". Unfortunately, naive as I was at that age, I believed the lie. Needless to say life after departing from our 3 bedroom apartment became pretty hard. I was burdened with the deep shame that had taken root within me.

All I had was music, if you could call it that. It mostly sounded like a bunch loud noises. My dear old dad who had success writing songs found the time to teach me a few cords on his six-string before I was kicked to the curb. At that time I didn't have much interest in playing the guitar or country western music which was his forte'.

With nowhere else really to go in 1980 I enlisted in the army. My determination for playing the drums didn't waiver despite my inexperience. I met some exceptional men that served along with me and we rocked out every chance we could during the time we served our country. The desire to play is something that has never left me, thankfully.
The reality is that I have had no formal instruction or training but have made monumental progress, although until this day I can still only count to four.

As the years flew by I played with many different bands but had little success. In 2002 through 2010 I co-wrote songs and performed songs with a band that was aired on several local college radio stations. In recent years I participated in praise and worship performances with different church fellowships. Recently I had the honor of performing in a program geared towards recover at Willow Creek Church in South Barrington.

This brings us to where I am today. After a 9 year failed relationship I was left with only my 12 string and out of necessity picked it up and began strumming those few cords my father taught me years ago. Unbeknownst to me my pain and emotion flowed out to produce another song titled "Now I Know". The words spoken to me were "I'm beyond loving you". This baffled me because I truly believed love can conquer all. Surely that love I had experienced didn't resemble the love given by our savior that suffereth long, is kind and never fails. He is whom I want to emulate, hence the verse that followed in the song which was "I could never be that way".

Since then I have scratched out 14 or so songs and I am in the process of getting back into the recording studio to finish my first complete album. This album is centered upon praising Christ and the fact that all things are given unto those who live by his word. My goal is to wrap up the "Gotta Believe" album this year, God willing. I have shared two unfinished rough tracks off the album including "Come to Jesus" and "Gotta Believe". With a little help from my friends and God's everlasting love I plan to share these blessings given by God with as many people as possible. These blessings include the strength and hope that can only be found by living as a believer, hence the album title "Gotta Believe".